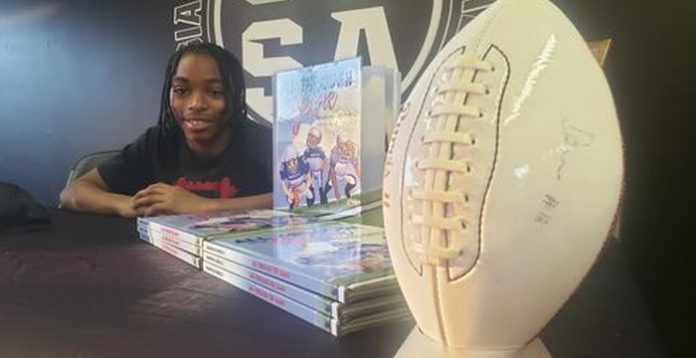 Most kids spend their time playing games or hanging out, but to your surprise, here’s the story of a 12-year-old who manages to score an A grade, while running his own business. Demetrius Purvis II, a student at the Luella Middle School, wrote his own kids’ book at the age of 11. Apart from this, he also owns a clothing line and air fresheners.

Purvis, who hails from Henry County, is also a wide receiver and quarterback.

He said when he was five years old, he got five touchdowns in a game. Purvis has managed to play well and grab the respect of the Georgia Elite Sports Academy. Eddie Grant, the football coach, was all praises as he spoke about Purvis. Grant said Purvis was a great teammate and very humble and focused. He always strives to become better at the game. Meanwhile, Purvis said he wants to grow up to be an NFL player while also running his business.

While this is extracurricular, Purvis has also managed to create an impressive academic record with A grades. Although he’s 12 years old, he has his whole plan figured out. Additionally, Purvis does about 200 push-ups every day to stay fit to be able to play football and makes his own money at 12 through his business. In a conversation with 11Alive, Purvis said similar to older people running their businesses, he is able to have his own just at the age of 12.

His latest venture was born during the pandemic when he wrote a book titled ‘All Through The Game.’ Meanwhile, his mom Calnetra said that Purvis was able to identify his skills and talents and put them to use at the young age of 9. He would draw football men, helmets, and football. We wish Purvis all the very best for his future endeavors, and this story also tells that sky is the limit for people who want to make their dreams come true.