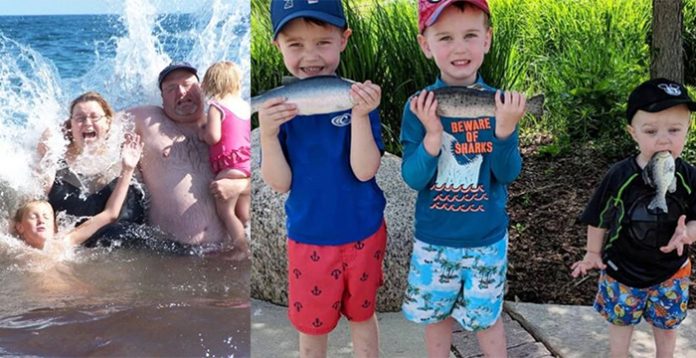 Who doesn’t love to go on vacation? Well, we all do, be it for a week or less. The excitement and energy go on another level. Packing our backpacks, traveling to the destination, planning to visit as many places as you can. But sometimes, even the most strategic plans don’t work out so well.

And later, when we see pictures we recall, laugh, and cherish that unplanned vacation. So, these pictures (ho-rrible or perfect) show a great example of that.

Here are some of the most hilarious vacation photo fails.

This one gets awkward, we all have one couple in our group who can’t take their eyes off each other no matter who they are, or how public a condition they might be in.
However, what could be incorrect with bending over for a sweet smooch when you’re out on a couple’s horse ride scene? Well, there’s just the small thing the horse handler could do, he stands face-deep in the water, when a couple of smooches above him.

What would you do in such situations?

It’s not a trending pose but still works well. Most of us love this modern and unique spin on the classic age-old Leaning Tower of Pisa pose. Who doesn’t love to take pictures as if they are holding it up in their fingers or hands? However, what about this hilarious group who decided to climb it? Not literally, but by posing in such a way it seemed climbed. Their picture looks quite good but you can imagine how they must have had to pose that way publicly and what must have happened seconds after it had been captured.

3. Caught in the Act

Look at this man in the picture. At first glance, one could think he must be posing for a photo, but when closely observing, we see that he is in the process of creating his photo, and this man happens to have captured him on the scene of doing it. This resulted in his hilarious image of a random man doing something funny in front of a pile of garbage.

We all have different preferences when it comes to proposing to our partners. Some like to propose in front of everyone publicly whereas some like to keep it private until their partner says yes to them. But whatever your preference might be, we don’t think anyone wants a random hippopotamus to photobomb the most special and romantic moment in their lives. Though the pictures seem quite funny as how a hippo is witnessing a human’s proposal.

How poor this woman seems in this picture, however, we can’t help but wonder what resulted in this situation. Isn’t she on a safari trip? Isn’t she driving through an area where one might expect wild animals to frequent? And isn’t she holding some snacks in her hands that these exactly said animals might be drawn to? She might have not thought that a wild animal would approach her like this. Clearly, this isn’t her happy snap. Perhaps she just didn’t think that any of them would actually approach. Clearly, this isn’t the happy moment she was expecting.

What a picture this is! How did this man end up in such a trap? We don’t understand what fun they get while covering themselves deep in the sand, they must ask for others to do it for them. Perhaps he volunteered to make some friends, to show them what a good sport he was. Although it seems his new friends took advantage of him.

Look at this adorable bond of the two in this selfie. Frequently during vacation, the pictures and selfies can comprise of the similar faces with whom you went on the trip. But look at this lucky lady, she made a new friend to pose with her in her selfie.

It doesn’t matter how much we make our mind broad, looking at this photograph we can’t help feeling weird. Like, why is this woman carrying all the bags and baskets all alone, while this man is walking freely beside her smelling lavender and enjoying life?
What actually caught my eyes in this picture is his shorts. This picture must have a thousand stories.

Who doesn’t love to take pictures with nature and amazing animals, a la Snow White in the forest? This woman must have wanted to capture herself by cuddling an alpaca, but she didn’t think about this giant bird swooping in for an epic photobomb.

Seems like these turtles decided to give some awkward biology lesson to this bunch of people who went to pose in front of them.

Look at this amazing picture, a little kid, a monkey, and a parrot are all chilling on a beach like they have been friends since birth. Though it sounds like the opening line to a bad joke. But there’s no denying that this kid was brave enough to get one great picture which he will remember forever.

How cute this picture is, it seems like two just now made a new friend. It’s good to witness that humans are improving their relations with sea creatures, since the Steve Irwin incident.

What a hilarious snap it is!? The mother seems afraid, the father seems to be laughing, and the kid looks like a football in the snap.

What’s funnier to you? The dad or the baby’s face? Kids don’t need both hands, do they?

The couple tried to recreate the popular pose of Titanic, which would’ve been a great snap. Eventually, it became too bad as this bird was the only one flying. Though, it wasn’t flying well.

“Keep The Music Going.” Metallica Goes Above And Beyond When Man’s Drums Are Stolen. – Video