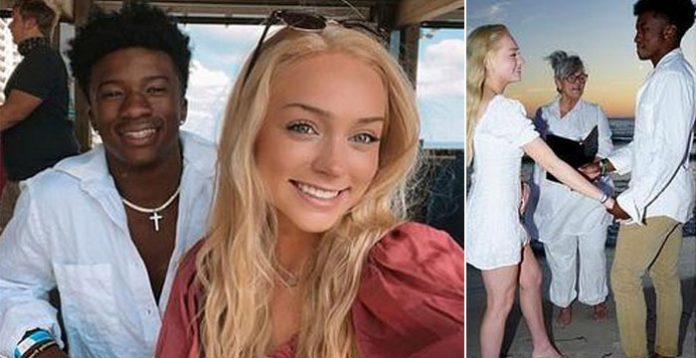 This young couple doesn’t vote for dating over a long haul, they just grant two weeks for their dating. The TikTok creators Trey Bell, 20, and Clara Bell, 18 married just after two weeks of dating. This caught the eyes of the people on the internet and the news went viral. However, the couples feel simmering their relationship half a month was just enough to make the right decision.

The young bribe Clara, from Louisville Kentucky, announced her impromptu wedding on 16 October on TikTok. She stunned her followers by sharing a video that states “getting married in three hours, stay tuned.” She said “At first when Trey proposed the idea of getting married, I was pretty on board and I was like that’s crazy ‘but we did it.”

Their wedding happened all of a sudden in Panama City, Florida. The $200 ceremony was so sudden that most of their friends and family couldn’t attend. They arranged for a minister and a photographer through a company that provided a same-day priest. And they purchased their wedding rings for under $5.

Clara said, “Our wedding was a shocking surprise to our family, they were like, ‘What?! You did what?!’”And most of them don’t even know that I am dating Trey so, not only I have to say I am married but also introduce my husband to them.” Thankfully, the families have given their blessing to the young couple.

“They are super happy for us now, Trey has met my parents and I have met his parents and they are happy, but at that time they were confused and surprised, but it was not in a bad way,” Clara told Kennedy News. Although the groom and the bride have spent only two weeks settling down, they were acquainted for a few years. They first briefly dated through Snapchat. She said, “When I was 15 and Tray was 17 we dated for a little. He first reached out to me via Snapchat asked me to go Kayaking. We both went Kayaking and dated on that summer.”

Clara said, “We both went to different schools and were separated, I went to a prep school in Georgia and he went off to college in Kentucky.” And they went in different ways and had no communication over the days, it was this September they again reconnected via Snapchat. And then the rest in current history, they now reportedly lives together and it seems their rapid relationship is working perfectly.

“Even though it sounds crazy I felt like we should do it, I wanted our relationship to work out this time.” Said Clara, she also states that any relationship has its difficulties. She further added that Marriage is certainly difficult, but not extremely difficult. And obviously, their union caught the eyes of people on social media.

Based on the Kennedy News, One of the TikTok users commented, “Just wait until they got separated because they have dated for only two weeks.” While another user writes a positive comment that states, “Lovely Couple. Ignore the hate it’s just jealousy.” Clara told Kennedy News, “I feel it was the right choice for us but, I would not suggest this for everybody”