30 Of The Most Daring Outfits Angelina Jolie Has Ever Worn 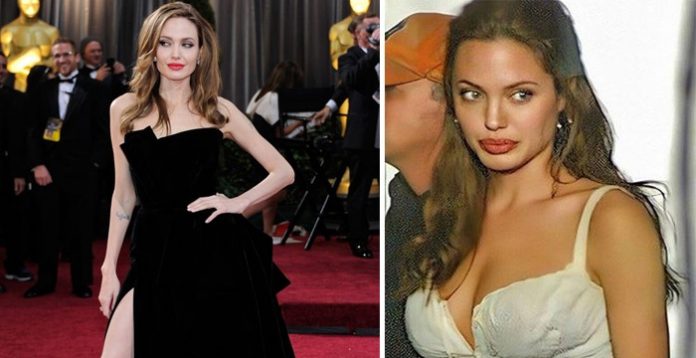 Angelina Jolie will always remain an icon for many reasons. Throughout the years, Jolie has captivated the world with her unique fashion style. There have been many instances where Jolie left her audience stunned with her fashion choices. She has always made heads turn every time she walked down the red carpet. Here we have put together 30 of her styles which will always remain iconic and never go out of style.

1. The backless black gown that she wore to the premiere of the Tomb Raider sequel in 2003 was indeed stunning.

2. During the 2004 Academy awards, Jolie wore a low-cut white satin gown that draped on her, and the look has been called one of the best Oscars looks of all time.

3. For Tomb Raider: Cradle of Life premiere in 2003, Jolie opted for a black halter dress with a plunging neckline and slit with no accessories.

4. In 2005, she stunned her fans again with an all leather thigh-high slit gown with a low neckline for the premiere of Mr and Mrs Smith.

5. During the Premiere of Salt, she wore a black gown that was almost entirely backless and had a high neck. She paired it with open-toe heels.

6. For the premiere of The Tourist, she wore a gothic black velvet skirt with a delicate bodice and a matching shawl.

7. Jolie wore a structured black gown with a daring high slit to the 2012 Oscars. To this day, that look is considered iconic.

8. Jolie looked stunning in a white lace dress at the premiere of Unbroken. The outfit was designed by Gucci.

9. At the Golden Globes Awards in 2018, she wore a gown with a feathery sleeve and a sheer top.

10. Jolie wore a shimmering gown layered with fringe at the premiere of Maleficent 2.

11. For one of the last Maleficent premieres, Jolie made heads turn with her white gown and a flowing cape with Swarovski crystal spiders embroidered throughout the dress.

12. At one of the Eternals premieres, she rocked classic menswear embellished tuxedo ball gown.

13. Jolie looked so graceful when she wore a Givenchy ensemble for the premiere of Breadwinner.

14. For the 69th Golden Globe Awards, she wore a cream Versace gown with a red clutch and red accents.

15. For the Premiere of Tomb raider in 2001, Jolie wore low-rise leather pants and flaunted her tattoo.

16. Jolie wore a beige dress with sh-eer panelling and an e-xposed studded b-ra for the Emmys in 1998.

17. For the premiere of Maleficent in 2014, Jolie wore a black ball gown made of rubberized silk. The outfit was designed by Versace.

18. Jolie wore a liquid black dress with a scorpion brooch at the Maleficent: Mistress of Evil premiere.

19. For the Eternals premiere in 2021, Jolie wore a strapless metallic gown.

20. At the 56th Annual Golden Globe Awards, where she won an award for her role as ‘Gia,’ Jolie rocked in a skintight silver gown encrusted with jewels.

21. For the premiere for Laying God, she wore a leather-trench coat dress.

22. Jolie wore a silk sage green dress with a high slit for the premiere of Beyond Borders and matched it with a strappy green heel.

23. Jolie looked stunning as she wore a sparkling black backless dress with a sheer hem and a satin bow at one of the award ceremonies.

24. Jolie attended the 23rd producers Guild awards wearing a black dress that was lace-panelled and had sleeves.

25. During the French premiere of the Maleficent sequel, she wore a flowy ensemble channelling a butterfly outfit.

27. Jolie walked down the red carpet in a beige dress with a high slit designed by Versace at the 2009 Cannes Film festival.

28. For the 2011 Cannes Film Festival, she wore a chocolate-coloured ball gown with a high slit. This dress was designed by her favourite designer Atelier Versace.

29. Jolie wore a one-shouldered gown with huge flower embellishment on the shoulder for the premiere of, In The Land of Blood And Honey.

30. Jolie leaned to her animal instincts when she wore a leopard print trench coat for the premiere of Shark Tale in 2004. She paired the coat with red pumps.