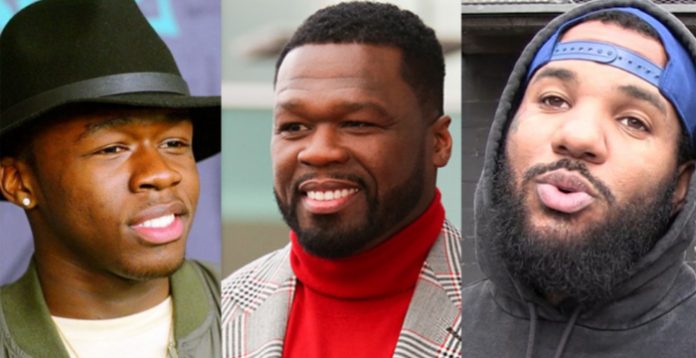 The Game and 50 Cent were once friends, but over time they became rivals. Thanks to their mentor Dr Dre, both east and west coast rap artists became gigantic breakout celebrities in the early 2000s. Guys nowadays enjoy teasing each other on social media. 50 Cent’s ongoing quarrel with his estranged son Marquise Jackson was recently covered by The Game.

Things between the two began smoothly. G-Unit was formed as a result of 50 Cent’s meteoric accomplishment with his debut album Get Rich or D-e Trying.

The Game was once a member of G-Unit, which he used to help promote his equality-themed debut, The Documentary. After 50 Cent’s sophomore album was attempted to push back to make room for Game’s debut, The Game was subsequently remove from G-Unit in 2005. This irritated 50, who was not pleased with Dr. Dre or Jimmy Iovine. The Game’s “Hate It Or Love It” video shoot, which showcased 50 people, reflected this conflict. Due to his dislike of Game, 50 Cent rejected to sit in the front chair during a scene and is instead been seeing sitting behind him for the majority of the video.

Later that year, 50 Cent declared on the radio that The Game was no longer affiliated with G-Unit, sparking a brawl outside the music station, with one of Game’s homies being strike multiple times by security. The men have released various diss tracks primarily directed at each other over the years, as well as posting remarks during interviews. The game is getting ready to release a new version. Drillmatic is set to be released next month, following a lot of backlashes. The album’s title is a play on Nas’ classic Illmatic, and it is said to contain over 30 songs.

The Game’s first public push for attention came when he openly chastised The Rolling Stone Magazine for failing to include his newest album in their list of the 200 Greatest Rap Songs of All Time. Speaking with sb24news, The Game said “On the back of my first album, I carried an entire coast for 20 years.” I don’t count because I don’t walk red carpets, dress up, smile, or pretend to laugh at brunches? “July 1st, #Drillmatic.”

During a viral interview with I Am Athlete, he made his second attempt at promotion. “You need loose change,” he said when asked what he thought of 50 Cent. “Exactly what sort of movie?” he asks when questioned if he would do a film with 50 Cent. He then quips that the only film he’d make with 50 Cent is one in which he comes in and looks after 50 Cent’s son and baby mother because 50 Cent is a bad father. “I have a problem with any person who refuses to care for his own kid for any justification.”

This is a direct response to 50 Cent’s estranged relationship with his eldest child, Marquise Jackson. Over the years, 50 and Marquise have mentioned their complaints. 50 Cent had a strained relationship with his eldest son’s mother, and he thinks she turned his child against him. Prior to the breakup, Marquise was a regular in 50 Cent’s videos and was frequently seen together with his father on red carpets and during appearances.

“It’s a sad situation,” he says when inquired if he’d resolve issues with his son. You don’t plead for the stuff that comes with accomplishment when you ask God for success.” He goes on to say that his child’s mom is obligated and envious of his success, which he has passed down to him. 50 is petty, and he falls back by posting a slew of photos of his younger son Sire Jackson, with whom he has a good relationship. Marquise has never meet Sire face to face.