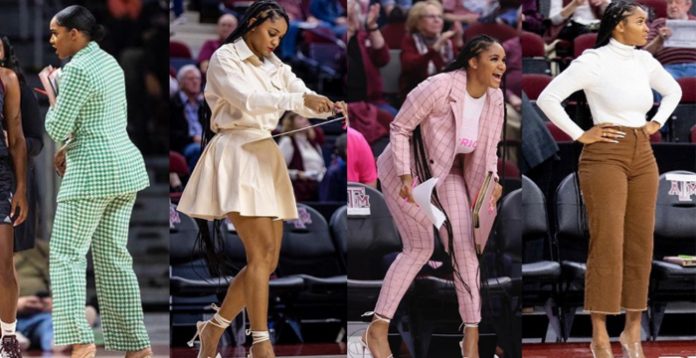 Carter knows a bit that her turtle neck top with pink leather pants could gain the media attention for a debate like is her outfits appropriate for the coach to put on or not. One of her pictures went viral when a man urged his followers to caption, “Sydney Carter, Women’s basketball coach, is her outfit appropriate as a basketball coach?.” Soon another man reposted and defended Carter with a caption: “what’s wrong with it???.”

Moral of the story, shut up and let black women be great ????

And then thousands of comments were made under that post of Carter’s outfit both for defending and offending her. After numerous discussions over her courtside looks. Carter disclosed her side of the story via Instagram and didn’t hold back while she showed appreciation for her fans and team.

She said: “Thank you to everyone for your support and kind words over the last few days.”

“Representation matters. As a Black woman in coaching, I take pride in showing that people who look like me don’t have to diminish our light to appeal to others, whose opinions never mattered anyway. I will continue to unapologetically be myself, apply pressure, and show that Black women can express our individuality while doing our jobs at a high level.” Carter also reacted to reviewers of her ‘inappropriate’ clothing to Yahoo! Sport. She said: “I just think that people are uncomfortable with a Black woman being in a power position,” she explains. “When you see a Black woman who is actually confident and embracing herself, I think that that’s very intimidating.”

Here are some of our favorite Carter courtside looks:

This green and white print two-piece suit is what every woman dreams to put on.

No doubt Carter is a fashion icon.

She looks absolutely a Barbie doll in this blouse and flared skirt.

Now, look at this outfit of Carter. Light piare pants are an obsession for many women.

This complimentary soft blue dress had to be on the list amongst our favorite looks.

Next is this casual yet cute outfit. Her brown corduroy capri pants and white turtleneck looks amazing.

Loved this look of Carter as it gives a boss women vibe.

Seems like Carter’s vacation mode is still on, this festive dress paired with red pumps is adorable.

A neutral jumper always wins the show no matter what occasion it is.

Carter kept her foot on reviewers’ necks stepping out in her cream collared blouse paired with skirt.

Carter proves that there will be ill-wishers but the show doesn’t end for anyone.