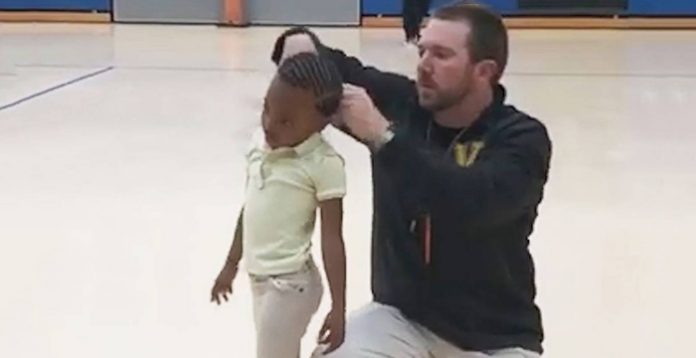 Kristen Paulk, a kindergarten student, went helpless to her teacher Jonathan to fix her hair. What happened next grabs the attention of millions. Jonathan Oliver is a Georgia Physical Education Teacher at WG Nunn Elementary School in Valdosta. During the basketball activity, the kindergartner student Kristen Park approached nicely to fix him a ponytail.

Jonathan went down on a knee and tied up a ponytail is so aww.

The assistant kindergarten teacher Kandice Anderson filmed this video candidly and posted it online that became Viral. Social media is melting with this cuteness. As a result, the video reached 3 million views and won many hearts within two weeks since it gets posted. After this gesture of equal love towards the child of color, the media started to notice him.

He, his friends, and his family got interviewed totally for his one overwhelming gesture. But he identified himself as a teacher among his other colleagues while putting it so reverent ” We want to make them feel like they’re at home and that they enjoy being here,” he added.

“We try to love on them as much as possible. To me, it was just a ponytail.” One of Jonathan’s habits is styling his daughter’s hair; with the aww of desperation, he added that his styling expertise only knows to fix a ponytail. Jonathan is Playful and easy-going too. It resembles, he speaks, ” It was a good thing she asked for a ponytail. Anything else, I’d say, ‘You better ask your mom.” and he spread laughter around the room.

On the other side, Miyah Cleckley- Kristen Paulk’s mother is so dignified as speaking, “I always know that Kristen is in great hands with him,” Cleckley said of Oliver. She also mentioned the reason Kristen found it comfortable to ask her Gym Teacher to fix a ponytail. It is that Kristen’s father took care of her ponytail while preparing for school. So it is apparent that the child Kristen sought help from her teacher proportionate a fatherly figure.

Melissa – This is par for the course for teachers. They are educators, substitute parents, counselors, nurses, mentors, and so many other things. They feed their kids knowledge and food. They are true heroes.

I’ve fixed bows and tied shoes. I have no children yet but I treat all my students like I’d treat my own children. They deserve that of us, they’re kids! It sets a good example. Who knows, we male teachers may be the only positive male role model in their lives. We have to show up everyday.

Katherine – Such a beautiful moment! THIS is what a true teacher is. That’s what they do! Think of all students as their own and test them that way. Love to them both and all the other TRUE teachers out there!