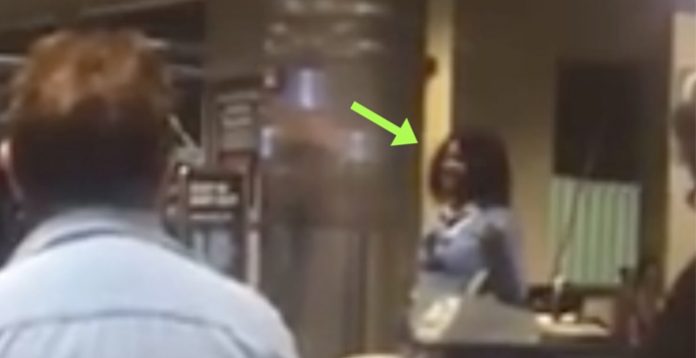 A special tribute was paid to a fallen Vietnam veteran who has served for more than 20 years in the U.S military by the Alaska Airlines Flights. When Julia Collman Jette was traveling with her husband Neal from Ted Stevens Anchorage International Airport, a special announcement was made by the Alaska Airlines flight to honor the d-ceased veteran they were transporting.

After the announcements has been done, the passengers took a moment of silence to honor the man on his final journey home.

Just then, Denise Snow, a flight attendant paid her tribute to the soldier by singing the National Anthem. Jette was overwhelmed by the incident, so she decided to share it on social media. She wrote, “Neal, my husband filmed this, and we were lucky he had his phone to film it. I was holding my tears back. This occurred just before we boarded our flight to Seattle at the Anchorage airport. The as-hes of a soldier were being carried to his home on the plane. He has served the country for 21 years. What a touching experience and what a wonderful voice of that Alaska Airlines employee!”

When Snow came to know about the presence of the soldier, who was only recognized as AJ, She did the announcement and told the passengers that she would be paying tribute to the soldier by singing “Star-Spangled Banner.” As she started singing her soulful voice caught the attention of everyone on the flight and they stood still to show their respect.

Neal said, “‘All but two’ stood still as Snow sang the National Anthem. It was amazing to witness the hundreds of people pulling their hats and standing still to show their respect.” There are no policies or norms stating staff to do anything to honor the soldiers. But, Snow always pays her tribute every time a f-allen soldier is carried on her flight. Not only that, she also honors the veterans who are making Honor Flight a program created by a non-profit organization to help U.S. military veterans visit w-r memorials at no cost.