Alicia Keys’ 8-Year-Old Son Egypt Shows Off Impressive Piano Skills By Composing His Own Song Like His Famous Mom In A Recent Video. 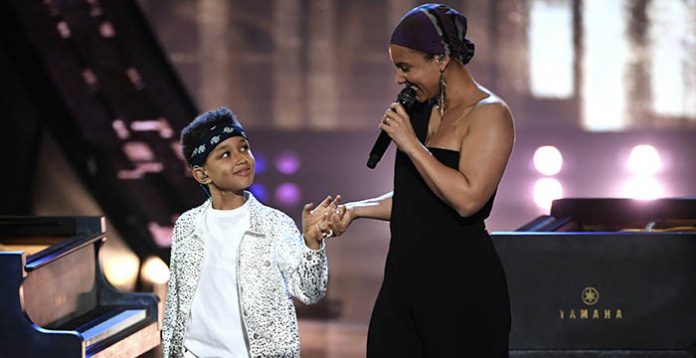 At just 11, Egypt Daoud Dean is making his parents Alicia Keys and Swizz Beatz proud with his impressive musical talent. In an episode of “Noted: Alicia Keys the untold story”, a You tube’s original docuseries she shared that her son started playing the piano at a very young age around four. She also states, she is often amazed by her son’s responsiveness towards music.

She said, “He has a gifted ear, and that’s really special.”

During the iHaertRadio Music awards in 2019, Egypt joined his mother on stage by playing piano while she sang the song “Raise a Man”. “It was his first performance with me on stage and I was completely wrapped up in his comfort during the performance because it was me who asked him to do it,” Said the songwriter and singer in an interview with PEOPLE. She also said, “At first he hesitated a bit but eventually he accepted it. I was so nervous at that time that I remembered I haven’t practiced for the show at midnight.”

She told PEOPLE, “ I have all this in my memory and I’m sitting and watching it with him and how I feel about my son – seeing him grow and watching him walk to the stage on his own hit me like a ton of bricks.” The couples often shared snippets of their Son playing piano and singing at home. She shared a video of Egypt and her enjoying together while performing together Sweet Dreams (Are Made of This), a 1983 hit.

She captioned it as “He is creating magic.” Apart from his talent in piano, it seems Egypt also has an absorption in song writing, Swizz Beatz shared a video of his son performing a song written by him when he was 6 years old the song was named “Super-boy”.

Egypt also has a younger brother, Genesis who is 6 years old. He also possesses outstanding talent in photography.

In June 2020, he assisted in taking pictures of his mother for the In Style magazine’s July issue cover. We are sure that Egypt and Genesis will reach heights in the future and we are curious on seeing where their talents would lead them.