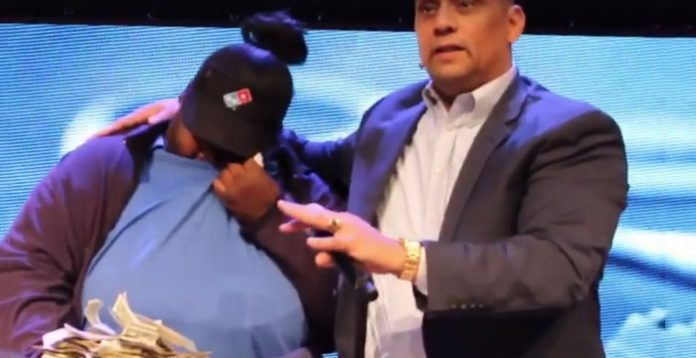 When a pizza delivery worker came inside Chicago’s New Life Covenant Church to deliver an order to the congregation, she got the surprise of a lifetime. When single mom Monique Hall arrived at the church, Pastor Wilfredo De Jess brought her to the stage and asked, “What is the average tip that you regularly get?” “$5”, said a surprised and perplexed Hall.

It’s at this point that the magic happens. As she stands there in astonishment the preacher hands her a $100 bill and counts out the bills.

However, as more people approach the stage to donate to her tip, more people approach the stage. Hall was utterly taken aback by the situation. “I’d like to express my gratitude to all of you. I have two children. “I’m a single parent,” she explained in an emotional Face-book video, wiping tears from her cheeks. “All I’m attempting to do is my best.” And I appreciate everything you’ve done.”

Later, Hall and Pastor De Jess appeared on Chicago’s WGN-TV to share their encouraging experiences. “I was jittery. “I didn’t understand why so many people were rallying around a pizza delivery guy,” Hall told WGN. “I wasn’t anticipating it, but I knew I’d been bat*ling as a single parent for a long time, and not having their father in their lives puts a damper on things, particularly when struggling to make ends meet. I was taken aback and overwhelmed when they did that. They made me feel so loved, all I could do was cry.”

The pastor added that the church is encouraging its members to honor others as much as possible. “We noticed that our culture had been lacking in this aspect of honor.” And, when you get right down to it, a lot of the issues we have in our culture are caused by a lack of honor. It’s contagious to be honorable.” According to Hall, she did not keep all of the money for herself.

Instead, she divided the meal among her colleagues.

“I had the impression that several of my employees were in the same boat as me, working in the same office.” “It was only appropriate that I contribute to them since I had been given to,” Hall told WGN. “I enjoy giving to others. I don’t have much, yet I still try to share what I do have. I only share it because I understand how it feels. I understood because I had been homeless with my children.

‘Share with someone else,’ I felt as though God was calling to me.

Let them know that someone is still thinking about them.’ So I did, and it helped me feel a whole lot better that I didn’t keep all of the money.”