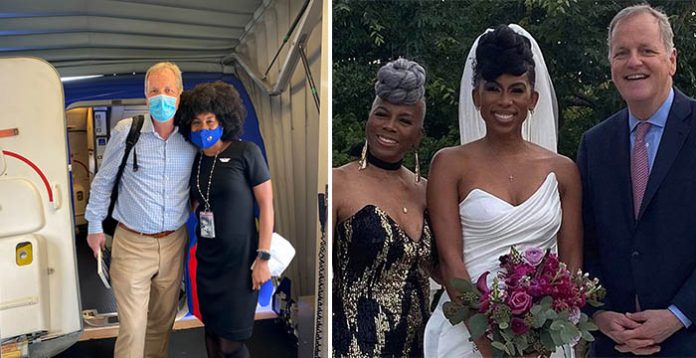 One year ago, Southwest Airlines flight attendant JacqueRae Sullivan was a little bothered by the events in the United States after the George Floyd issue. Her home city of Dallas, Texas, was er-upting. However, she drove to Dallas Love Field for a flight to Panama City on Friday with some ray of hope and understanding.

She said that she prayed on her way in asking God to help her get to work today.

When the flight started boarding, she performed her usual safety checks, greeting passengers with a hello and a smile through the mask. That’s when she noticed one of the final passengers to board carry a book ‘White Fragility by Robin DiAngelo. In a conversation with CNN, Sullivan said that the book was on her list, and she wanted to read it.

After she finished her service, she moved towards the back of the plane, where the man who was reading the book was seated alone, next to a window, typing on his phone. She bent down to say hello, and the two started conversing about the book. As the man started speaking of the situations existing, Sullivan suddenly got carried away. She then thanked the man for the incredible conversation and for caring, and she hugged him before he asked her for her name and then introduced himself.

He said, “I’m Doug Parker, the CEO of American.” He then quickly wrote a note to Sullivan expressing his gratitude for having met her. Sullivan was excited and waited for a day before posting about her experience on social media, and positive responses came in flooding. Her mother, Patti Anderson, who works as an employee at American Airlines, contacted Doug to express her gratitude for the moment he shared with her daughter. Doug responded by saying that he was honoured to have spent time with a strong, young woman, trying to learn from others.

One year later, her new friend, the CEO of American Airlines, attended Sullivan’s wedding and met with her family. Sullivan also shared wedding pictures with Doug on her social media page and said that her family has now become special friends with the Parkers.

Dvario – Two more lives changed forever. They and those they share these value changing experiences with will benefit the rest of their lives.

Michele – This adds a humane touch to a cold corporation . Corporations must lead by example . This CFO made me proud to be a American. I hope under his leadership American Airlines will continue this positive message . We’re all equal

Karen – Every day people get married under many many unusual circumstances which brought them together in the first place. It’s no longer a rarity.

Jeanette – Doesn’t matter who you are in life.

Rosalyn – So beautiful. That’s the way to get a race conversation going. Congratulations on your wedding and your new friendship

Angie – Wonderful. Wish more people were open for conversation. Alas, they are nowhere near it. They rather hold on to and perpetuate the lies as they turn a blind eye to the issues. Nevertheless, I’m at peace and confident a change will come even if it happens only one person at a time.