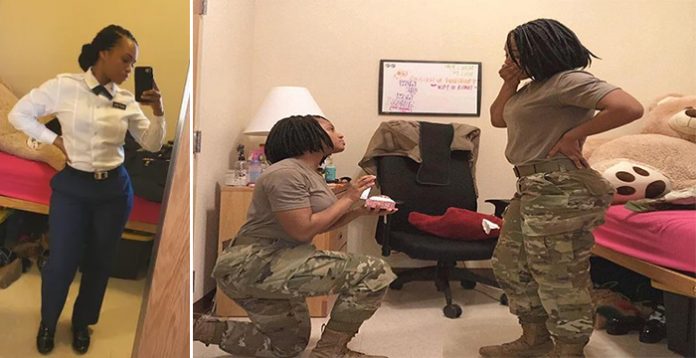 An American Soldier, Shaunice Safford, went viral after she announced her engagement to herself through an Instagram post on Valentine’s day. She said that she was so sure that she wouldn’t want to spend the rest of her life with someone else.

In the Instagram post, she also wrote that when she saw herself go down on her knees, she couldn’t help but say yes and said that marriage was never in her mind but now she’s sure that she wouldn’t want to spend the rest of her life anyone else but her.

However, Shaunice is not the first person who has been in the news for this thing. Earlier another woman in the UK named Grace Gelder got married to herself after she was ‘tired’ of all the dating drama. Grace even managed to create a very fancy proposal for herself and had about 50 people to witness her wedding with herself.

The photographer who clicked her pictures said that she was so invested in herself that she felt like dating someone else would be a lot of effort. She also said that as she walked down the aisle the lyrics of the famous song Isobel was playing in her mind. She said that from the proposal at the park bench to a wedding everything went great.

In a conversation with Guardian, she said that although the announcement that she was getting married to herself would have sounded a little Nar-i-tic, it was all about self-love and that it took her months to finally increase her self-awareness.