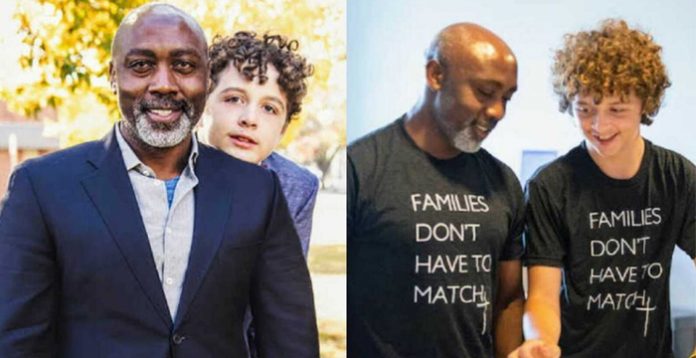 Peter Mubatazi adopted Tony Mutabazi, a 13-year-old kid who had been ab-andoned by his parents, as his son. As soon as he learned about the boy’s tra-umatic history he formally adopted him.

Peter Mubatazi, a foster parent, intends to remain his ‘father’ for the rest of his life. Many people across the world are inspired by the touching narrative of a family and the love of a father and son combo.

Peter Mubatazi knew he would become his father the moment they met. Peter Mubatazi, is from a faraway continent and had a difficult upbringing. He grew raised in an extremely disadvantaged environment in Uganda. He didn’t have a happy upbringing, and he was forced to flee his family and become a homeless urchin.

When people refer to Peter as a foster parent, he recalls how he was saved and taken in when he required it the most, and how he learned to realize the plight of these children. “How can I not give back?” he said. Someone has come into his life to assist him, but now it is his chance to assist others by adopting his oldest son.

Peter began fostering children while residing in Oklahoma. He was first unsure if he’d be a viable person for being a single parent, but he went to the local organization, pledged, and completed the necessary classes to become a foster parent. He received his license four months later.

Peter feels he was supposed to meet Tony, which is why the two h-it it off immediately a-way as the ideal father-son duo.

Tony has been in foster homes since he was two years old, and at the age of four, he was welcomed by a couple in Oklahoma, but they eventually left him. Nobody knows who his birth parents are. He was adopted again when he was 11 years old, but he was deserted in a hos-pital again.

Returning to the foster system was distressing for Tony. “I couldn’t understand…how one could do that,” he added. Peter was contacted by a foster care worker who asked if he could have Tony for the week. When Peter first met Tony, he felt they were intended to be a family.

“I recall telling him, ‘You may call me Mr. Peter,’” Peter said.

‘Can I call you dad?’ Tony inquired. Peter and Tony are now officially father and son, as of November. “ADOPTED TODAY!!!” Peter stated in an Instagram post. I was preferred, wanted, adored, I blossomed in his heart, I was the missing link, and despite my flaws, I am still loved today. Whether they came from your womb or someone else’s, little spirits make their way to you. Glad I found my soul!”

This was not the conclusion; there was still another festivity in store for them. Peter became a US citizen two weeks later, and he rejoiced with his son, Tony, at his side. “Today I became an American Citizen: I’m happy, appreciative, grateful, and excited!” Peter said. In barely two weeks, I became a father and a US citizen, and I can’t express the pleasure in my heart and home after such a long trip.”

Vickie Carroll – Letting him go was the very very best thing they could have done for him. They didn’t know and their reason might not have been for the good . But God’s turned this into the best reason for this child. Praise God for this wonderful man who knows how to love.

Teresa – This is one of the sweetest and most uplifting stories I have ever read. Truly an amazing story to read and a beautiful story of faith and love. It is so beautiful to see such love, courage, grace, resilience, and trust. Love in action. May you both be blessed with even more love, health, happiness, and kindness for the years to come.

Michelle – What an amazing man Peter is! I also read part 2 and Peter’s background story and it’s just beautiful to see a man who had such a hard life as a kid to grow up and give so much back by fostering kids and giving them so much love!

Joyce – What a beautiful story. God Bless you for adopting and raising this young man.

I was raised by a loving foster family. They loved me like I was one of their own children. I am forever grateful for them

Debra – Amazingly awesome story! God bless you both. May he watch over you and guide you on your incredible journey of loving and helping others!