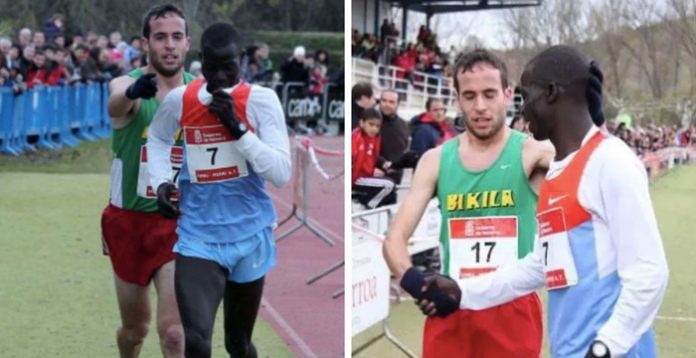 Sports is a very competitive activity, and no doubt people would lose interest in the game if it wasn’t competitive. But the competition between the players is also very much justified since they go through rigorous training for that one spot.

But this Spanish athlete, Iván Fernández Anaya, might have lost the match on purpose but won millions of hearts across the world. Anaya’s rival was an athlete from Kenya named Abel Mutai.

In the beginning, he was well ahead of Anaya but eventually slowed down because he thought he had reached the finish line when he still had 10 meters left ahead.

Anaya, who was just behind, could have taken this as an opportunity to take the first spot but he didn’t.

He stayed behind Mutai and used his hands to signal Mutai that he still hadn’t finished the line.

Everyone was left speechless but when asked later, Anaya said that Mutai was the one who deserved that position and it wouldn’t be right of him to take advantage of Mutai’s mistake. Even Anaya’s coach admitted that he wouldn’t have done what Anaya did but was proud of him.

Anaya said that he earned more respect and love from people for what he did and even if he had won, nobody would have even remembered after a while. This story is indeed very inspiring and teaches us that we rise by uplifting others and how one needs to prioritize honesty.