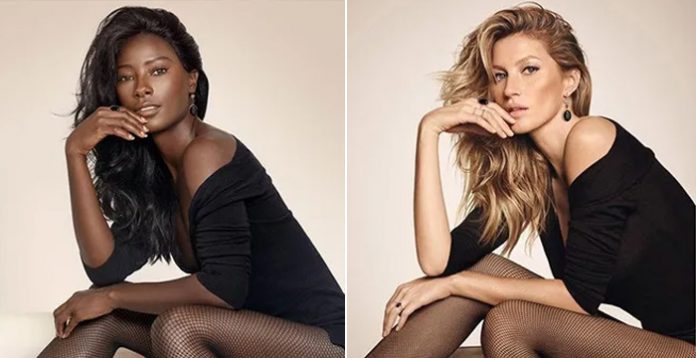 Deddeh Howard was always passionate about fashion from a very young age. She’s been always keen on learning about fashion and its role in culture. But there had always been agony in her for not seeing a black woman on fashion magazines’ cover page.

“Something that always bothered me when you see these amazing images [was] that very rarely you ever see a black woman on them,” Howard wrote in her blog Secret of DD.

“Black girls are almost invisible,” she wrote. So she came up with the idea to create a photo series, named, ‘Black Mirror,’ in which she recreates different poses of famous models like Gigi Hadid, Gisele Bundchen and Kendall Jenner.

The series was shot with an intention to raise a voice against ‘uniformity’ in the fashion industry. Howard wants everyone to prioritize inclusive diversity in every profession. Her objective was to make people aware of the lack of heterogeneity in the fashion world and stimulate black women to come up in large numbers against this ‘disturbing’ trend.

She also wants black women to take inspiration from her and make an effort to break social barriers. According to Howard, there is a significant difference in the participation of white and black women in the fashion world. She noticed that around 75% of models are white who got featured on the fall 2016 runaways.

Lack of diversity, sometimes, can be very embarrassing, she wrote on her blog. Asserting her point of view, she mentioned a fashion show in her blog where models were walking to Beyonce’s ‘Formation’ – a tribute to Blackness, when none of their models was black.

Diversity & representation play a key role in developing the psyche of a community as a whole and making them capable of contributing positively to society. It’s important that everyone should be given a chance to succeed without any sort of discrimination. Lack of diversity must be discouraged as it ‘paralyzes’ a section of society.

“The next generation can only get inspired and reach for the stars themselves if they believe they can do it too.” Howard wrote on her blog. “For that reason, diversity in ad campaigns is in my opinion much more important than you might think.”

Nicholette – I think this is so artistic and beautiful. To be honest, I think some of the originals look better, some of the remakes look better, and it’s tie from some of the other photos. Regardless of skin color, the women are all beautiful. But really… this is all about the color. Not the color of the skin. The color scheme. So saying that “so-and-so could have easily done this too, but they’re clearly r-acist” is inaccurate. Certain color schemes look better (or rather, stand out) on different skin types. So if the marketing team is selling a black shirt, it will stand out better on white skin. or visa versa. Personally, when I see a dark skinned woman wearing all white, it creates this beautiful, draw dropping photo.

Regardless, I’ve never once looked at an ad in a magazine and thought to myself “there is too much of X race in this magazine.” All I see is “wow, she’s beautiful, I want to do my hair/makeup/wear clothes like that”

Shannon – I looked at each image to see which of the two were more “eye-catching” and those with higher contrasts tend to be more striking to me regardless of the models’ skin color. This, ultimately, is an advertiser’s or the artist’s goal… to get you to stop and look… then buy what they’re selling. All those women are fantastic, btw. I just tried to look at the whole image artistically and not at the person’s color.

Carene – Beautiful pictures! Beautiful women! To point out any color of skin you automatically become a r-cist… Personally I don’t care, I just want to see beautiful models. I don’t want to see plump everyday women because they are all around us. I want to see models that can inspire us to look better because then we feel better about ourselves.

Megan – Though I love her pics, I believe they use mostly white models because it’s essentially a blank slate. Focusing more on the product or idea than the model. The model is pretty much a hanger for clothes.