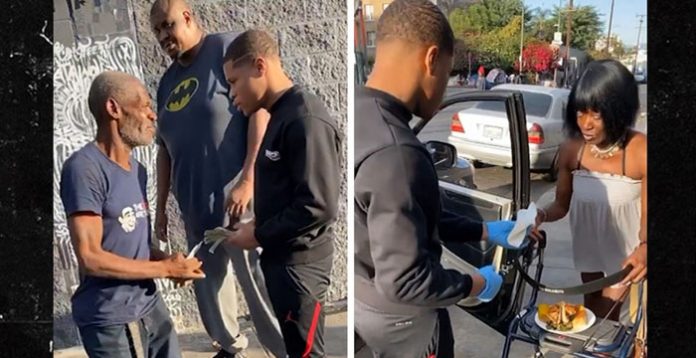 Devin Haney, a boxing superstar who recently made $1 million in his previous fi-ght, took to the streets of Los Angeles to share the cash with those in need… WE’RE TALKING ABOUT CASH! The 21-year-old WBC lightweight champion stocked his SUV with everything from shrimp to crab legs and other delicacies in order to feed the homeless on Skid Row.

“I gave out food on Skid Row today,” Haney explained… “When I ran out of food, I gave them the money so that they could buy food for themselves.

Haney was in town for his birthday, according to reports, but instead of taking presents, he thought it was more essential to serve others. Haney is one of boxing’s greatest young fi-ghters, with a 24-0 record and a win against Alfredo Santiago on the undercard of the KSI vs. Logan Paul bout.

He has great plans for the future, including a potential superfight with another rising talent Ryan Garcia, which would be Massive! In the meanwhile, it’s great to see Haney paying back to society simply because he desired to.