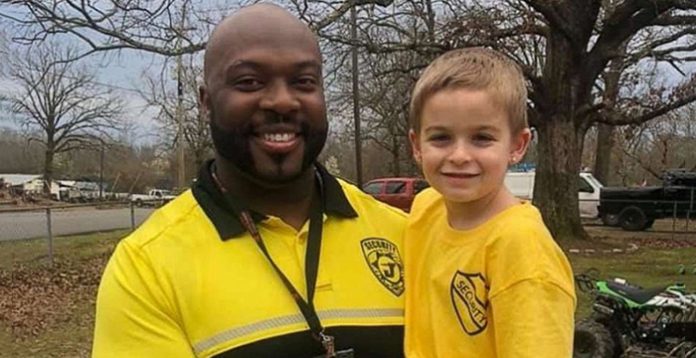 A 5-year-old kid opted to dress up like his school security guard for “Dress As Your Favorite Person Day.” Officer Jeffery Cross’ outfit was worn by Easton Blocker when he came to Bobby G. Lester Elementary School in Jacksonville, Arkansas, this week. Easton’s mother, Lauryn Blocker, claimed it was his idea from the beginning.

Blocker claimed she bought a yellow t-shirt for Easton and used vinyl letters to write “Junior Security” on it. Cross, who has worked as a school security guard since August, was taken aback when Easton picked him to dress up as him.

“The majority of the scholars are supposed to dress up like their instructors or classmates,” said Cross, a 35-year-old father of one. “Since the first day of school, Easton has come up to me and hugged me. He’s really cute. He has a high-spirited, upbeat disposition.”

Blocker asked Cross to play kickball with Easton at her house on Wednesday. She expressed her delight at the opportunity to turn Easton into the adored guard for a day. “I’m going to say, ‘Hey, this is how much he loves you,’ for someone who my son looks up to so much.”