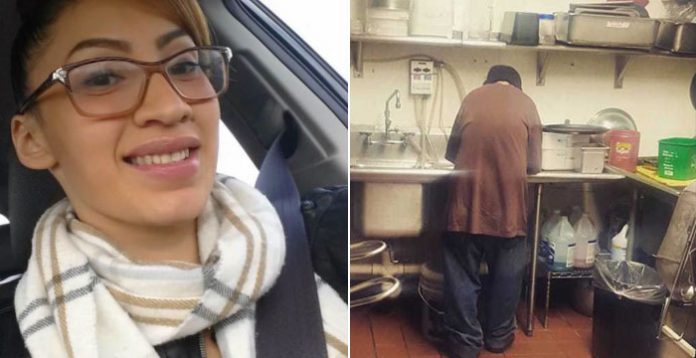 Cesia Abigail has always been kind to everyone and is always ready to lend a helping hand. One day when a homeless man came to her restaurant looking for some handout she decided to help him.

She wanted to know more about that man’s situation, so she asked him, “Why don’t you have a job?”. The homeless man started looking at the floor as he was feeling embarrassed and then he proceeded to explain his situation.

He said that he had been looking for work everywhere but because of his multiple felonies he was unemployable for any steady job. She thought about it for a moment, then she gave him an offer which he certainly couldn’t refuse.

She described the scene on social media, that she was short staffed that day, so asked him, “You want to work? I have a job for you!”

His eyes opened wide and there was this shine in his eyes and he smiled brightly and his smile made Cesia’s day. He further said, “I’ll do anything for some food”.

After 2 weeks to her surprise, he was still there and had been helping likewashing dishes and taking trash etc. She said that she paid him his first salary and he bought food for her restaurant and he even paid for that because it made him feel good.

The homeless man, named Marcus has not missed a shift to this day. If Cesia hadn’t helped her, who knows where would he be today.

One thing is sure her little gesture changed his life completely. So do something nice today and don’t judge them just because they are asking for money.

Karl Shuler – Great job. Thank you for showing that it doesn’t take much to help or change a life.

Larry – The homeless man was honest to mentioned about his record and that was enough as far as I am concern.

I respect the lady for her kindness and I hope others would be inspired by her actions.

Barlos – The most satisfaction in the world is to give something to someone in real need. Well done and thank you for your kindness.

Kiva – Stuff like this makes me want to cry because I truly believe that I we had this outlook more often we would really be able to help others for the better! You just have to believe and not give up!

Chris – If only we can duplicate this attitude and behavior to each other all over the world, the world would be a much better place.