Ceaser Emanuel Shades Jada Pinkett Smith With Meme: “I Want A Wife But Not The Kind Will Smith Got” 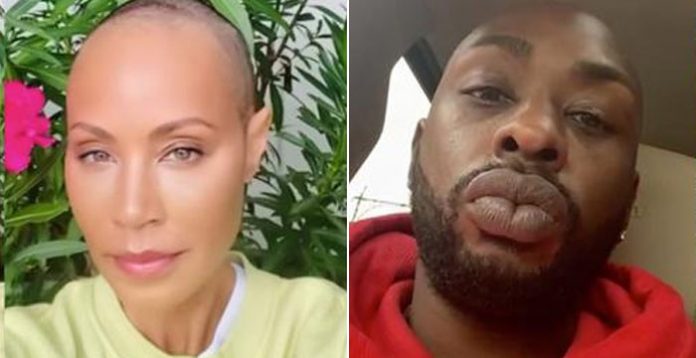 Jada Pinkett Smith has been in the highlights for many reasons including, her past relationships and marriage to Will Smith. The Red Table Talk host has been a recent topic of discussion for many people. The most recent one to speak up has been Ceaser Emanuel of Black Ink Crew.

In an IG live story, Ceaser added his thoughts and wrote, ‘I want a wife but not the kind Will Smith got. Take ya time God’ followed by a laughing emoji. Ceaser, who has had a pretty troublesome dating history has played out on his time on the small screen.

He was in a long-term relationship with Dutchess Lattimore, and the pair got engaged. However, they parted ways in 2018. Jada and Will came into highlights after she was liable for admitting to having had issues with Will in the bedroom. However, she refuted the claims and said, that their s-x life is great, and they never had any issues.

Will has always been portrayed as a nice guy since he has not publicly admitted to having been involved in any extramarital affairs. Instead, he has been focusing on himself. He recently completed a fitness challenge which was documented on his YouTube channel. The series is titled ‘Will Smith: The Best Shape of My Life.’

While a few people joked that Will Smith might need new friends. In several memes, you can see rapper Future welcoming Will to the dark side. In a post to his own story, Future let everyone know that he was aware of people trying to get him and Will Smith to be friends. “I’d rather hang with Jada #respectfully.” He said on his IG story.