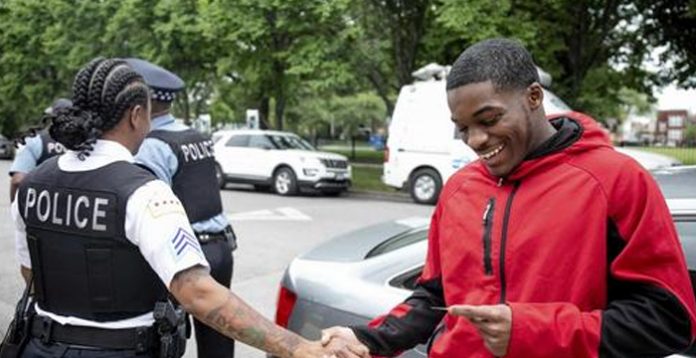 A Chicago man earned more than praise for his heroic act of saving a stranger who has fallen into an electrified rail during a brawl at L station. His bravery and kindness were rewarded by presenting him with a brand new car. 20-year-old Anthony Perry was surprised when he received a 2009 Audi A8 from Early Walker, the founder of the anti-ferocity organization I’m Telling Don’t record.

After gifting him a car, Walker handed over a $25 gasoline card to Perry and said, “We literally wanted to show our apperception for this brave act because we need more people like you. We need more people like Anthony Perry in this world.” Perry was happy to receive the gift, he said he works in Amazon Fresh in Suburban Oak Lawn and he used to take two buses and a train from his home South Side neighborhood of Park Manor to reach his job there.

Now, with the gifted car, he said it would make his life much easier. On Monday, he noticed a man lying unconscious on the electrified rail tracks when he got off at a station on the Chicago Transit Authority’s Red Line. He quickly jumped down and rescued the man from the electrified tracks. Perry said, “I hoped that I would grab him and not feel anything, but I felt a little shock all through my body. I didn’t let that stop me.”

With the help of another person, Perry managed CPR on the man wound by electric shock. He was then taken to the hospital and was expected to live. The Chicago Sun-Times reported that officer are still investigating the cause that led the man to fall onto the tracks. The car was delivered to Perry blocks away from his home as officers and residents looked on in support.

Lt. Chicago officer Lt, Yolanda Irving said, “many times people assume young man out there doing the wrong thing, but this is just a prime example of how a young man reused a man by taking it upon himself to jump in and do the right thing.”