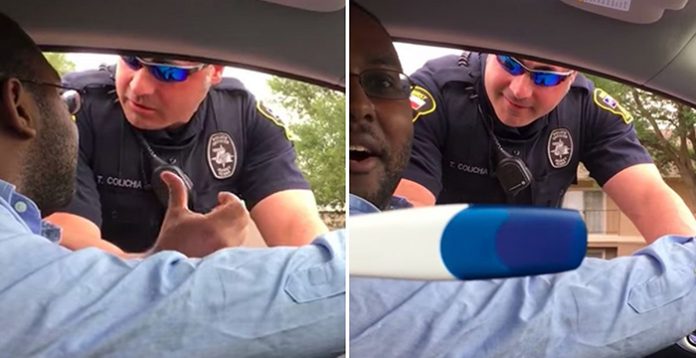 Every woman wants to reveal their pregnancy news to their husband in an exciting way. They wanted to make sure that the day is treasured for years. Aspiring moms are coming up with different creative ideas to tell their husbands “you are going to be a daddy”. Nikk Rock is no exception she too has come up with a stunning idea to reveal the exciting news to her husband, for this she even took the help of the local po-lice and planned a special car ride.

Nick Rock wanted to convey the special news in a creative way. She sat down, thought a lot about it, and finally got this stunning idea. In making the day a memorable one, she asked for the help of the Hu-rst department and they agreed to get involved in the play. She wanted to thrill her husband with her news, and she was sure her husband wouldn’t expect such a huge surprise from her.

Later when Nikk and her husband were taking a drive, an officer pulled them over. As per Nikk’s plan, the officers started walking towards the car and started questioning them, Nikk’s husband was confused about why they were asked to stop by all of a sudden. The officer and Nikk had some small chat and they started explaining the reason why they were asked to pull over. He said that there is a baby in the car and the baby is not in the car seat.

On hearing what the officer said, Nikk’s husband began explaining that he doesn’t have a child. The officer asked him again and again whether he is sure that he doesn’t have a child. As the officer kept asking he nods towards Nikk. She was sitting quietly in the passenger seat holding a pregnancy test in her hand. Finally, when Nikk’s husband looked at her she tells him that the officer is right and they do have a baby in the car and the baby is not in the car seat.

Nikk’s husband paused for a few seconds and couldn’t realize what was happening. He stared in disbelief for a while and slowly understand what was going on, he then grabbed the pregnancy test from Nikk’s hand and wanted to see it by himself. Then another officer brought a present that has a small toy with a message, “Dad see you on your birthday, I’m due on your birthday” and a dress for the baby that has the words “I love my Amazing dad,” inspired. The couple was excited to welcome the baby into their life, they then celebrated by hugging and kissing each other.