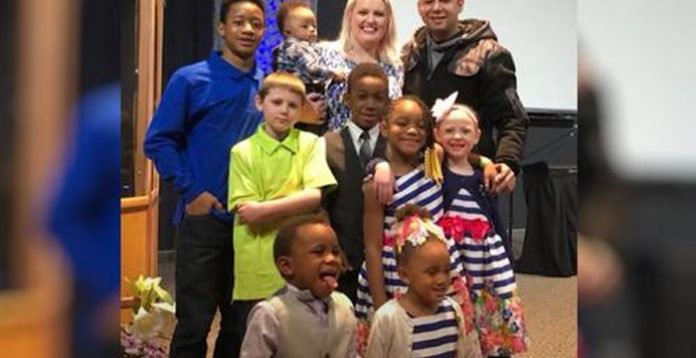 In recent years, adoption has gained a lot of prominence. Most often, couples adopt children either because they want a big family or because they have infertility issues. But for Shannon and Gabrielle, the first reason applies. Despite having their own biological children – Scott and Gianna, they felt the need to expand their family.

That’s when they thought of adoption as an option, and their adoption journey began around 2012.

Gabrielle said that one day she saw the pictures of three children on the website of Michigan Adoption Resource Exchange. She was on a lunch break at work. She thought these kids would be separated. They need a home, and nobody will take them. So she went home and talked to Shannon. She thought he was going to tell her that she was being crazy, but he was like ‘those are our kids.’

Now they approached a private foster care and adoption agency based out of Michigan to help them throughout the adoption process, and they lent a helping hand. But just when everything was about to be sorted, the couple found out that the three kids had siblings. They didn’t want to separate the kids from their siblings, so they decided to adopt all the three kids and their siblings. So now they were to adopt six kids in total.

However, the process was not easy. It took Shannon and Gabrielle about seven whole years to legally adopt the six kids between the age group 2-15. Although it took them some time, the couple doesn’t regret any bit of it and thinks their family is now complete. Gabrielle said that it’s not easy having so many kids around since there’s never a moment of silence, but the older ones help the younger siblings. They grow together and help each other.

The couple said that every kid of theirs is unique, and there’s not a single day they regret their decision and said that the kids bring so much joy and happiness into their lives. They hope their story inspires many more people to adopt kids.