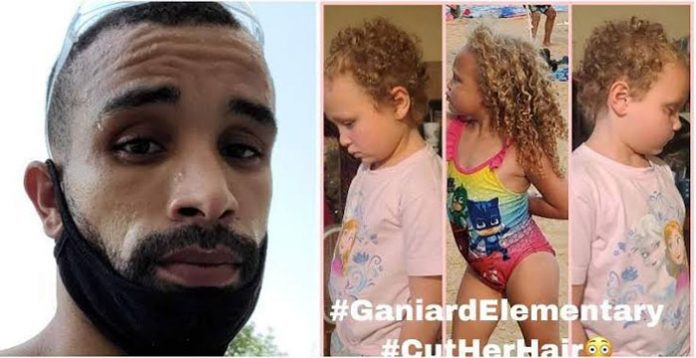 The dad of a 7-year-old Michigan girl whose head was trimmed without parental consent by a teacher is su-ing the district for $1 million. On Tuesday, Jimmy Hoffmeyer filed a suit al-leging race prejudice, a strike, ethnic discrimination, and intentional infliction of emotional distress against Mount Pleasant Public Schools, a librarian, and a teacher assistant.

His daughter is of mixed race. She is currently enrolled at a different school.

According to Hoffmeyer, the girl came home from Ganiard Elementary School in March with most of her locks on one side of her head clipped. A student al-legedly cut her hair on a school bus, according to the child, who is Bl-ack and White. Her mom and dad filed a complaint with the school administrator, and the girl’s hair was styled at a hairdresser. She returned home two days later with much of her hair on the opposite side of her head shaved. “I inquired what occurred and responded, ‘I thought I warned you no child should ever shave your head,'” Hoffmeyer recalled. “But, dad, it was the teacher,” she added.

Her hair was chopped to make it more even.”

Hoffmeyer claims the district failed to adequately train and oversee its staff in a legal case filed in Grand Rapids. The district announced in July that a staffer who cut the girl’s hair had been admonished, and that an impartial third-party investigation found that, despite the worker’s “positive motives,” cutting the girl’s hair without her guardians’ approval and without the knowledge of district administrators vio-lated school policy. Two other employees failed to report the incident, and all three have apologized since then. There was no evidence of systemic ra-cism in a school board inquiry.

Hoffmeyer, on the other hand, claims that he was never probed about the event. In a statement, Amy Bond, president of the Pleasant Public Schools Board of Education, stated, “We are optimistic that the truth will triumph given our district’s appropriate and effective response to the incident and the conclusions of the third-party inquiry that was completed.” “We will vigorously defend ourselves in court against these bogus charges, and we will not let this detract from our purpose of providing every kid with a world-class education that prepares them for college and careers.” Bond and district administrators have been contacted by Fox News.