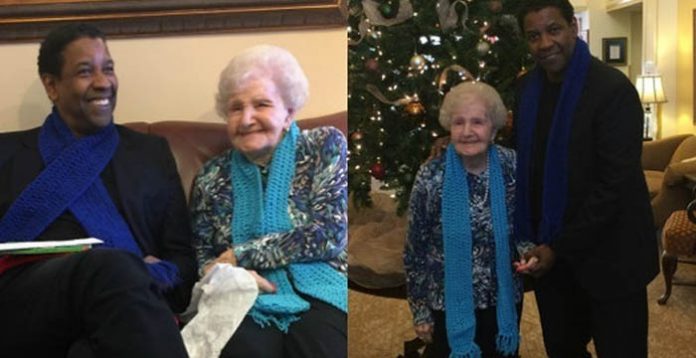 A photo was published online showing the legendary actor Denzel Washington sitting next to his childhood librarian. In December, Connie Mauro turned 99-years-old and has spent nearly half of her life working at the Mount Vernon Public Library in New York. Throughout her career, she must have handed over thousands of library cards to the children.

However, the librarian had always remembered award-winning actor Denzel Washington who was ‘the cutest thing’ according to her.

When Washington was 7-years-old, librarian Mauro handed him his first library card, which both have never forgotten that day. The person who posted the photograph wrote in the caption, “it showed her grandmother, a 99-year-old former librarian from Mount Vernon, next to Washington, whom she had always remembered fondly.”

Several people tried contacting Washington to invite him for her 99th birthday celebration. Unfortunately, due to his packed schedule, it seemed like he won’t be able to make it on celebration day. However, he did want to wish Mauro a happy birthday. So, on the day of her birthday celebration, Washington called Mauro on the phone. Mauro said, “You were the cutest kid! I loved you. You were my special library boy.”

To which Washington responded, “You don’t know how much you helped me. You helped me so much.” He then promised Mauro he would come and visit her in December. He said, “I’m gonna come and see you.” When Washington visited her, both talked for hours, reminiscing and catching up. According to the poster, the librarian made three scarves for the actor Denzel Washington.