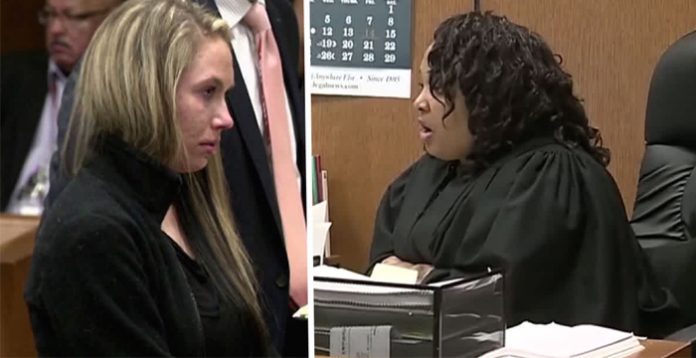 Amanda Kosal was sentenced to 15 years in custody because she drove her car in an into-xicat-ed state, which cost a 31-year-old man, Jerome, who was the father of five, his life and also hurt his fiancée. During her trial in the court, she was brought into the Michigan courtroom over which Judge Qiana Lillard presided.

While Jerome’s family read their impact statements and bravely expressed their feelings over Jerome and the impact it made on their lives.

Judge Lillard heard giggles coming from the back of the courtroom.Two members of Amanda’s family were laughing, including her mother, Donna. Judge Lillard was taken aback for a second, and she decided to teach them a very powerful lesson. The judge first asked Jerome’s family to pause for a minute and turned her attention to Amanda’s mother.

‘This is a court of law, and these are serious matters,” she said. “I understand you all are not happy because your loved one is going to custody. But guess what? She’s going to pr–on for the choices that she made.

These people are here because an ignorant act by your daughter took away their loved one from them, and you’re sitting here acting like it’s a joke?” Judge Lillard took things a step further and the footage showing her unconventional statement went viral.