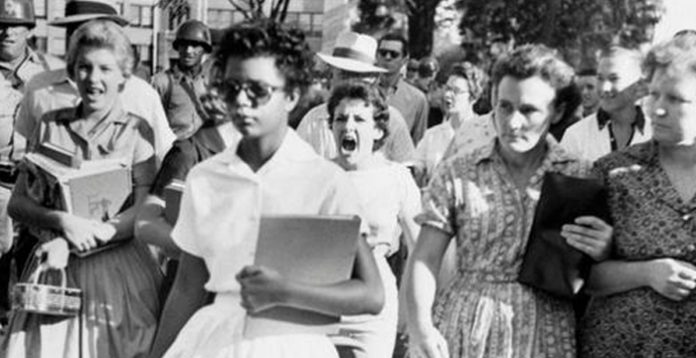 On the first day of school, September 4, 1957, nine pupils came to Central High School in Little Rock, Arkansas. They were smart kids who had been selected for the state’s most renowned institution due to their academic brilliance. They came to learn and to create history as the school’s first Bl-ack pupils. They wouldn’t go to school that day, or for several weeks afterwards.

Their entry was blocked not only by an enraged white mob, but also by the Arkansas National Guard, which had been summoned by the governor to prevent the children from joining the school.

The first day, eight of the nine arrived in a carpool organized by the local NAACP chapter. Elizabeth Eckford, a 15-year-old student, didn’t have a phone at home and couldn’t be reached to hear about the carpool plan. She rode the city bus to school, which dropped her off just two blocks away. As she arrived, she was alone in the face of the prejudiced mob.

Much of the moment was captured in a single photograph, but not all of it. We witness Eckford being pursued by a mob of enraged white supremacists, but we don’t see them shouting, “Lynch her! Lynch her!” We can see the Arkansas National Guard, but we can’t see President Eisenhower ordering federal forces to enter the building weeks later. Although we see Elizabeth Eckford walking with confidence and a high head, we don’t see the guts and determination it took her not to walk through a crowd of people who were thr-atening to k-ll her for going to school.

Eckford attempted to return home after being denied entry to the school, but she was unable to do so owing to the 250 or so irate white people who had gathered behind her at the bus stop where she had been left off. She made the decision to try to get to the next bus stop, which was a block away. What about the student in the photo who is yelling at Eckford? Hazel Bryan was her given name before she changed it to Hazel Massery.

Her parents were openly ra-ist, and she was the daughter of such parents.

In the years that followed, Massery would have a change of opinion. She became a supporter of the civil rights struggle and realized how far she had gone wrong. She apologized to Eckford in 1962 or 1963. She didn’t stop there, though. She left her prejudiced church, participated with initiatives that helped disadvantaged Bl-ack students and single Bl-ack mothers, read Cornel West and Shelby Steele’s writings, and debated with her parents about race inequality.

Eckford and Massery are both still living today. Eckford’s 80th birthday was celebrated in October with a modest gathering in front of Central High School, with students from the Civil Rights Memory Project and staff in attendance.

This isn’t history from a long time ago. People who witnessed it with their own eyes are still alive. What is Eckford’s reaction to the photo? She told the Arkansas Democrat-Gazette that when she sees it, she often feels nothing and other times it knocks her out. But she’s never liked the picture, and she doesn’t see herself in it the way others do.