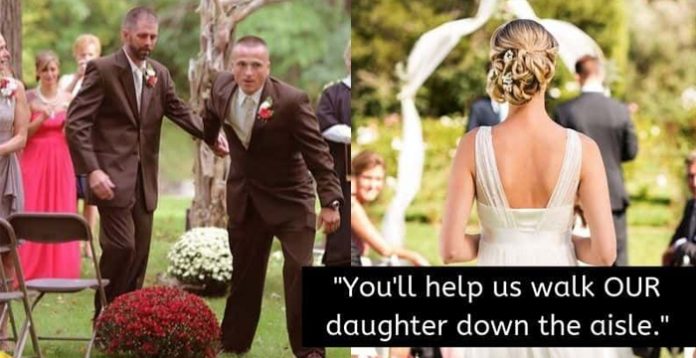 Weddings are apparently one of the happiest moments of life. It’s a new beginning for the couple. However, organizing for the big day can be quite difficult especially if the family is not on favorable terms. Brittany Peck underwent this confusion when she had to put on responsibility to her two fathers, one her biological one and second her stepfather, both raised her.

When Brittany Peck was 6-years-old her parents got divorced. At that age she became familiar with the courtroom and viewed her parents battling for a long custody for her and her sister. Peck told,

His biological father, Todd Bachman, did not want to share his little girl with her stepdad, Todd Cendrosky. However, with the passage of time, things started getting better as both of her fathers understood that they were great parents. In 2015, Peck was getting married, and now new tension surrounded them as it was her wish that both of her fathers should walk down the aisle however didn’t know how to tell her biological father, Bachman. As for her stepfather he is a very sentimental one, and cried to his wife for a week leading up to the marriage.

Peck said, “He was like, ‘I have a tux, but I don’t have anything special to do.” In another interview, she added that Cendrosky felt awful “because he knew he would just sit in the crowd.” “I finally just built up the courage to call him about two weeks before the wedding and said, ‘I really need to talk to you,” Peck shared of the call she had to make to Bachman. However, before she could even say a word, he understood what her daughter’s dilemma was. So, Bachman told Peck not to worry about anything and he would make things happen.

Her wedding day arrived and Bachman drove her daughter to the outdoor ceremony in a golf court. Just before she was about to walk, Bachman left her and made his step towards her stepfather, who was sitting in the first few rows. Bachman grabbed his hands and told him, “Hey, come with me. You’ve had just as big of a part in raising this child. It’s time you and I walk our daughter down the aisle together.”

Upon which Cendrosky was brought to tears with such an act and said it is the best moment of his life. Guests present in the venue were also emotional as they saw both fathers walk the daughter they love down the aisle. Wedding photographer Delia Blackburn captured that lovely moment, Bachman grabbed Cendrosky and shared it on her Social media page, which has since been shared many times. There are many beautiful tales of anticipated happenings while brides walked down the aisle.

Earlier, Taylor Loren shared her wedding story on her social media which received mixed reactions. Loren disclosed that when she walked down the aisle her husband checked his phone. Her story made some viewers angry until she explained why he did it. It’s already been four years since they married, and both are going strong with a unique wedding story to share and hold for forever.