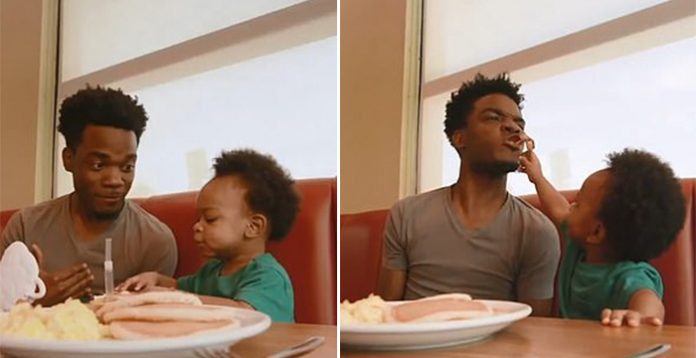 This recent ad from the popular diner chain is sure to drag you to Denny’s. The ad features a father and son combo who had racked up nearly 1 million reactions for their viral video which was posted just two weeks ago. Their video caught the eyes of people and they become an adorable duo on social media.

The video was shared nearly 1.5 million times and it has received over 300,000 comments.

The minute-and-a-half-long clip shows the adorable conversation of the comedian DJ Pryor and his son Kingston Jierre who is just 19 months old. After the father-son combo is welcomed by the social media users, Denny’s decided to make the best use of it. They created a video featuring DJ Pryor and his son sitting in a restaurant with pancakes, bacon, and eggs placed in front of them. Pryor first begins their conversation, “Perfect that we ended up here to have a nice booth chat, just between father and son right?”

But Kingston seems to have no interest in what his father has to say, he just keeps staring at the plates in front of him with plastic straws in both of his hands. After that Pryor asks his son, what’s happening in his life, to which Kingston answers adorably with a series of babbles by waving the straws in his hands.

The ad has been released on Father’s Day where Denny’s added the tweet to make use of this duo’s comedic dynamic on father’s day. “Really?! That is your favorite cartoon show, Pryor responds stating, they stopped that, oh Man we gotta write a letter to the network and bring your favorite cartoon back” And Kingston had something else to add.

After that, they were seen having their breakfast and little Kingston was seen feeding his dad a piece of bacon. They also showed their appreciation for spending quality time at the restaurant. “Find adorable baby from viral video and grab him to Denny’s” The original video showed Pryor and Kingston busy in a regular back-and-forth jest while watching the television together and talking about what they see on the screen.

Pryor doesn’t miss a single mimic from his son, every time Kingston turned to talk to him, signaling at the screen to highlight his points and miming a complete understanding in an impressive way. Shanieke Pryor’s wife captioned the clip, “Only him! Having a full-blown conversation with daddy. She also added the hashtags “#MrPersonality” #TheseTwoAreAMess,” “#OurHouseisAlwaysFullofLaughter,” and “#HeNeedsHisOwnShow.”