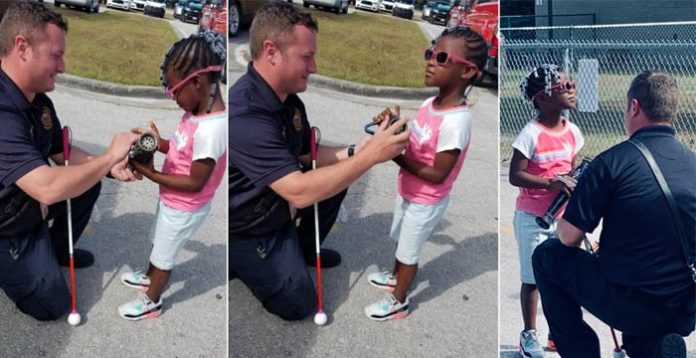 Firefighter “took it upon himself” to make the girl, who is visually challenged, feel special. A Florida firefighter went above and beyond the call of duty to aid which made a little girl’s day. As per the social media post of Suwannee Primary School, Suwannee County Fire and Rescue Captain Chip Leathlean saw a little girl “not engaged” like other children in a fire safety project.

So, Leathlean decided to “take it upon himself” to make that little girl (visually challenged) feel special.

Talking with 11Alive, Leathlean shared, “I understood that visually challenged ‘see’ with touch, and I wanted to include her in part of it.” Leathlean plucked her to one side and let her touch and feel the pipe. He said, “When she touched the nozzle, her face lit up, and so did mine.” The beautiful moment was captured and later the school’s social media page uploaded it. Soon more than 6,000 people reacted to the school’s post, and when 11Alive shared on their page, it crossed more than 100,000 views.

Leathlean said, “he didn’t even know that anyone was taking photos.” He added, “It was nothing about me, it was all about the little girl. Shanta Oglesby, the mom of a little girl, shared that her daughter was excited when she came home from school that day and told her what happened at school. Shanta Oglesby, “When she got home, she explained – she was just talking about what happened.”

When Oglesby realized how her daughter’s photos went viral on social media, she said she “cried like a baby.” Leathlean said he was motivated by the reaction. He said, “It reaffirmed positivity in my career and the impact that we have as first responders.”