Girl Who Was Paralyzed Surprises Favorite Nurse By Walking – Video 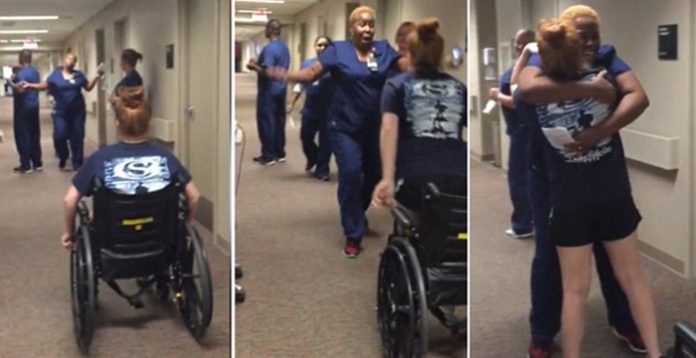 A nurse burst into tears when she saw her paralyzed patient suddenly walking toward her. Bailey Murrill from Denton in Texas lost all the feelings in her legs and has been inexplicably paralyzed. She was taken care by her favorite nurse in the hospital for 11 days.

Later when she started feeling her legs again and regained movements in her legs, she decided to surprise her favorite nurse. So when the nurse came on shift she got up from her wheelchair and started walking toward her.

The nurse was stunned so seeing her walk she started screaming with joy and hugs Bailey tightly. Both of them burst into tears and the other staff around started watching them. The girl’s nurse said, “I told you, just hold on to that faith.”

Bailey’s mother Becky Murrill filmed the video, to treasure the moment of her daughter giving a surprise to her nurse by walking again. Bailey took 11 days to recover completely after she was taken into the hospital for losing feelings from the waist.

The cause of her unexpected pa-ralysis is still not known. “Just a day before when Bailey still had not regained her movements in her legs. I wanted to thank everyone for their blessings, support, and prayers.”She added in the description.

The video was named ‘Love our nurses!’ and it was viewed nearly 1milluion times. Initially, Ms. Murrill posted the video on social media and it has been viewed more than 340,000 times and then later she decided to share the video on YouTube.

After posting the video on social media she had received nearly 200 friend requests.