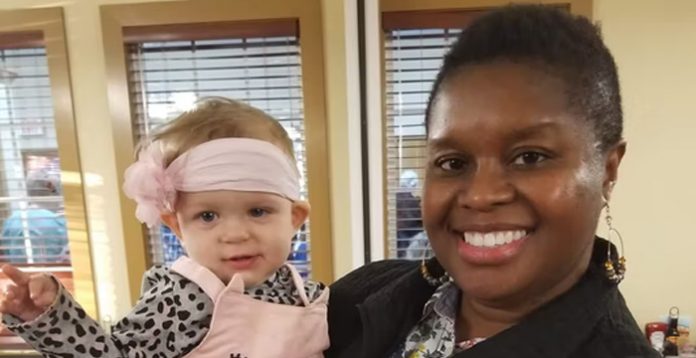 Hannah Marie Jarvis, a mother from North Carolina, was having a good time during the thanksgiving holidays with her family at the North Carolina Golden Corral restaurant. mJarvis was also accompanied by her 7-month-old daughter, Calli. Jarvis started feeding the baby some mashed potatoes, and immediately she started to ch-ke. Jarvis was so confused and did not know what to do and a waitress called out asking if anyone could help.

That’s when a lady named Deborah Rouse, who was also at the restaurant that day, came forward to help the child. She started to perform the Heimlich maneuver on the baby. She started holding her down and took several bows to her back, and finally, the toddler started breathing again. The Heimlich maneuver is usually performed for adults. However, in certain cases, it can be done to children differently.

In a conversation with WLOS, Jarvis said that she was grateful to Deborah and called her an angel for having saved their daughter’s life. Jarvis also said that although she and her family thanked Deborah, they forgot to take her phone number.

She even posted about the incident on her social media page. Jarvis telling WLOS that she wanted to track Deborah again to thank her went viral and caught the attention of Deborah herself, who responded to Jarvis saying she had messaged her number to Jarvis. She also responded to Jarvis’s post and thanked God for having let her be there at the right time that saved a child’s life.