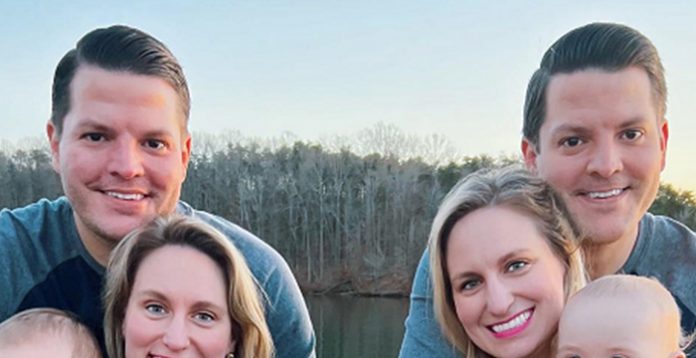 Identical twin sisters Brittany and Briana, 35 married identical twin brothers Jeremy Salyers and Josh, 37 and now they are blessed with babies who are genetically so similar that the cousins are more like brothers.

“You might be familiar with the terms, Irish twins, fraternal twins, and Identical twins, but we have quaternary twins.” Briana Salyers told TODAY parents. The Salyers are blessed with boys, Jett and Jax. Jett would turn a year old in January while Jax would turn 1 in April. Apart from sharing the same initial, the cousins hold a unique situation that makes them genetic brothers.

Brittany says, “The boys were born to identical twin parents just nine months apart. Twins married twins and have babies at the same time.” The twin sisters have talked over the probabilities of quaternary twins.

“We were looking for overlapping pr-egnancies so that this would happen. We thought it would be cool as there’re are only 300 quaternary marriages mentioned in the history,” said Briana. The twin couples shared a joint Instagram page named Salyerstwins and posted their boys’ pictures along with some interesting scientific facts.

The caption says, “Jett and Jax: Genetic brothers, Cousins and Quaternary twins.” Briana and Brittany met Jeremy and Joshua in 2017 at the Twins Days festival, from there their relationship began.

The couples got married the next year in Twinsburg, Ohio at the Twins Days Festival. Their marriage was captured on camera for TLC, It was not much less than a fairy tale wedding.

Both their families in Virginia under one roof and not only that they also ran a wedding venue site together.

Brittany then shared about their unconventional living agreement, she said, “ it was all what we four wanted, we got engaged and we all wanted it to happen in that way. Josh and Jeremy also understood the twin bond like us and it was something very nice. We get to spend a lot of time together.” After sharing their enthralling journey online, the couple had to face some negative comments on their families.

“We often ignore some maniac stalker comments and just go with the positive views,” Brittany said.

“Some people consider our story strange while some others think it’s wonderful. We have received a lot of interest and support, and we are grateful for that.” And for their future baby, the couples have not planned anything as of now. Briana said, “We are still discussing on opting for one more pregnancy each. The babies are pretty young and we are waiting a little longer to move ahead. We would make a decision soon.”