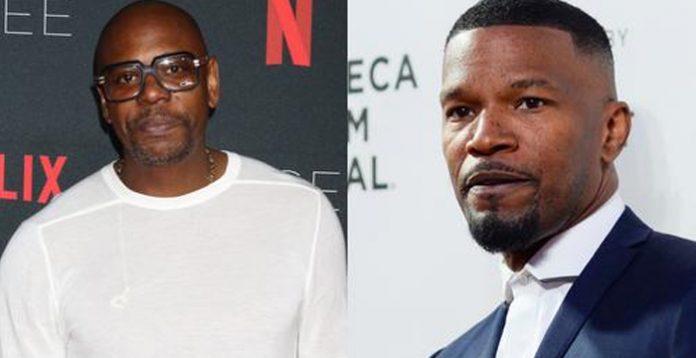 Comedians have recently come out in support of one another after their artistic creativity used to make jokes are being inspect, making them feel like they don’t have the freedom to speech anymore. Recently, millions around the world watched Chris Rock getting smack at by Will Smith after the former made a joke about his wife, Jada Pinkett.

Another incident that most of us might know of is comedian Dave Chappelle performing at the Netflix’s.

Is This A Joke festival, and a 23 year old tried to get to him. Although the 23 year old Isaiah Lee might not have been able to do anything to Dave, it doesn’t stop one from doing such a thing in the future. The Hollywood Reporter said that Dave wanted to talk to Lee. Later, it was found that Lee’s grandmother was removed from her house in Brooklyn, and he wanted to draw Dave’s attention to the incident.

Jamie Foxx was also present during the incident and tried to push the boy back, and later Dave thanked Foxx by saying, “Whenever you’re in trouble, Jamie Foxx will show up in a sheriff’s hat.” Foxx said that Dave was a genius who had to be protected at all costs. He also said that he initially thought it was a part of the how and later realised that Dave needed help. Foxx also promised all his comedian friends who were present that nothing would happen to them.