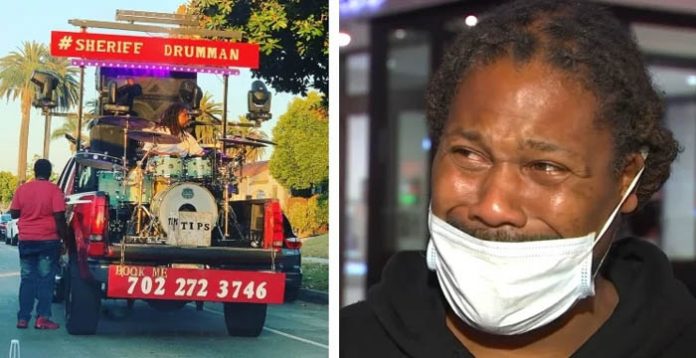 Anthony Sheriff, AKA Sheriff Drumman, is well known around Los Angeles and the surrounding areas. He is a travelling man band who performs from the back of his custom red ford F-350. The truck is his pride and joy, and he has spent countless time and money to modify it to be the perfect stage for his massive 13-piece kit.

The truck is not just his mode of transportation and mobile stage; it is also his primary source of income.

Sheriff Drumman’s business improved during the epidemic because he performed outdoors, and was booked straight up for months. There were days he would have six to seven gigs. He said, “A lot of gigs were piled right on top of each other. When I was leaving one gig, I’m flying to the next customer, telling them I’m 10 minutes away. I’m running a little late.”

His truck is so noticeable with all the machines, colour-changing LED lights and had once caught the attention of Steve Harvey, who was impressed by the musician that he featured him on the Steve Harvey Show that helped Sheriff Drumman’s career even further. Things were going fine until he walked outside his home one day to discover that his truck was not there. Sheriff Drumman was so sh-ocked and kept asking people for help. He even recorded several messages on social media asking people to help him find his truck since it was his only source of income.

A few days later, his truck was found on some railroad tracks, and the drums were nowhere to be seen. Sheriff Drumman had no option but to call off many upcoming gigs that cost him a lot financially. Many kind souls began to donate so that he could rebuild his kit. Although the money was enough to cover the cost for the truck’s special, replacing the drums would be expensive. That’s when the music band Metallica decided to reach out to him and help him.

They donated the entire cost of a new drum kit to replace the old ones. When Sheriff Drumman was informed about it, he was so happy. He said, “Man, thank you guys so much. Thank you so taking the time and resources to support and help what I do. I love you for that.” The next day Metallica replied to him by a tweet saying, “We are honoured to be able to help out a fellow artist. Keep the music going. Sheriff Drumman.”