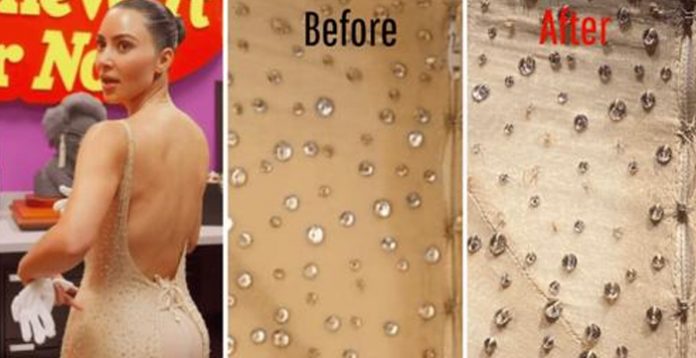 The Marilyn Monroe Collection posted pictures of the gown, claiming that some of the crystals were “missing” and others were “hanging by a thread.” Is it true that Kim Kardashian ruined Marilyn Monroe’s gown? Despite losing 16 pounds to fit into the legendary Monroe’s gown, Kim Kardashian was bashed on the Internet the day she arrived on the red carpet of The Met Gala 2022.

People who use social media had previously mocked Kim, claiming she was too big for the outfit. Sarah Scaturro, the former head of the Costume Institute at the Met’s Costume Institute, chastised the Kardashian for even requesting to wear the iconic gown. She told the Los Angeles Times, “I’m displeased because it sets back what is deemed professional treatment for legendary costumes.”

“Back in the 1980s, a group of costume experts came together to declare that iconic garments should not be worn. “So my concern is that important people will put pressure on peers in iconic outfit compilations to let them wear apparel.”

A post shared by The Marilyn Monroe Collection (@marilynmonroecollection)