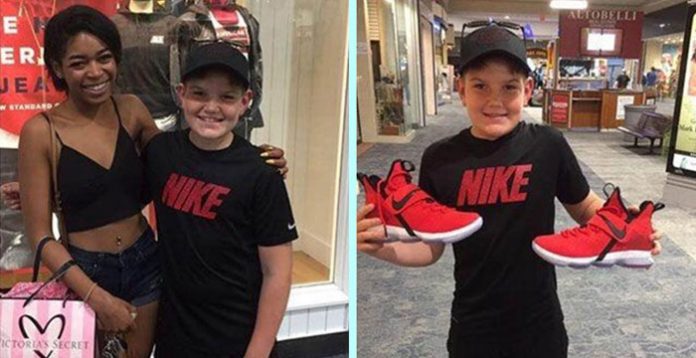 After witnessing a young boy sad upon knowing that a store doesn’t sell basketball sneakers within his budget, a generous young woman decided to take responsibility to make his day by buying him any pair he loved. Tinyia Frank went shopping at the mall and wanted to get a pair of shoes to match with the pants she’d purchased.

She entered Champs in Warren, Ohio, and was having a conversation with a salesperson regarding what exactly she is looking for. Meanwhile a humble young boy came to them and asked if it was okay to ask the salesman a question.

Tinyia recalled:“He asked the man if they had any basketball shoes that are under $75, because that’s all that he had.” “He kind of put his head down and looked disappointed to say it, not like he was saying it disrespectfully or anything, just kind of sad because that’s all he had.” The salesman informed him that they didn’t have any basketball sneakers in that budget, and Tinyia saw the boy’s facial expression change. As soon as he was about to walk away, she started a friendly conversation with him and asked him what he needed the shoes for.

Tinyia, 19 who is a college student and works part-time then came to know that the boy’s name is Jordan and is currently in fifth grade who plays on a traveling basketball team. She told Jordon to go and choose any pair of basketball sneakers which he wanted to buy and she would buy them for him and in return all she wanted is a photograph of him wearing them at his first match. Later, Tinyia shared, “We’ve got one of the highest rates of overdoses in the country in our city, and we have nothing for the youth. They took away our centers that we had for young people, our dancing teams; nothing gets funded.

So when he told me that he was on the traveling team and couldn’t afford the shoes that he wanted, I couldn’t do anything but feel bad because of the way that I was raised: “If you got it, you give it to people.” After spending 30 minutes Jordan found the perfect pair of sneakers. He chose a red pair of LeBrons, and Tinyia didn’t mind that they cost $180. According to Tinyia, “If I was going to get him some shoes, I wanted him to get what he liked.” She added, “Money is just money. Not to say it’s not important. I work a lot for my money. [But] I’d rather go without getting my 15th pair of shoes and give it to a little boy who clearly only had one.”

After knowing about all this Jordan’s father was surprised and emotional at the same time. He thanked Tinyia and asked to take a photograph of her with Jordan and his new sneakers. Later, Tinyia shared the photograph online with a caption: “So I’m at the mall and a little boy comes into CHAMPS asking about basketball shoes and if they have any under $75 the worker said no and the little boy’s face DROPS.”

“So I ask the boy his name and what he needs shoes for, turns out he’s on a basketball team and is d-ying for new shoes so I told him if he sends me a picture of him at his game I’ll buy him whatever he wants and his dad nearly br-eaks down.” She further wrote: “YOU ARE A VERY WELCOME JORDAN ENJOYING YOUR NEW LEBRONS AND GOOD LUCK!” Thanks to Tinyia’s selflessness, a young boy received his new shoes and a beautiful memory which he will surely cherish for a lifetime.