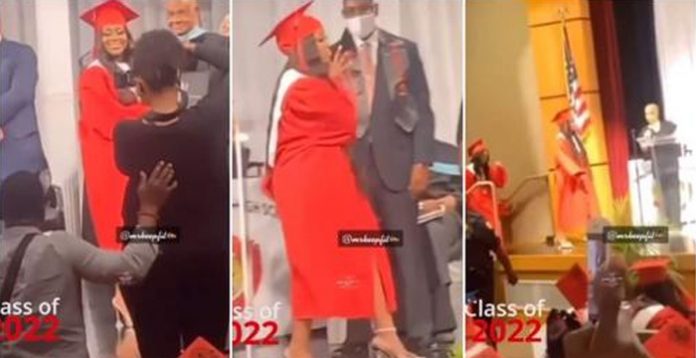 In a recent incident, a graduand embarrassed her teachers on stage during her graduation ceremony by refusing to give any of them a handshake. This video was posted on TikTok, and it went viral in no time. In the viral video, the woman is seen walking onto the stage in an academic gown to receive her degree.

On the stage, there were male and female teachers who stood in a line to give the students a handshake, and the last person in the line would give them their degree.

The first man on the line looked very embarrassed when the girl ignored his handshake and spread her five fingers on his face. She then went ahead to pose with the last person in the line who handed over her degree. In the caption, it was written that the teachers had made her senior year very hectic, and that’s why she did that. The video evoked mixed reactions.

One user wrote – ” Older generations always seem to think they’re entitled to respect just cause they’re older, no you gotta earn it like you always tell us.” Another user wrote – ” “I use to think the same way, then when you get thrown into “real world” you then understand, they only ment the best.” Meanwhile, another video of a young Nigerian man in his car mocking an elderly on a bike, who happened to be his school headmaster, also went viral.

The man was mocking his headmaster in the Yoruba language and said he was the teacher who told them they wouldn’t make money if they didn’t study. The headmaster, meanwhile, turned his face in the other direction and ignored the young man.