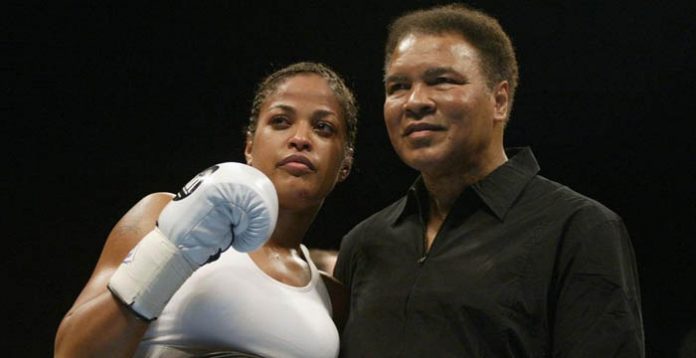 Muhammad Ali’s 41-year-old daughter took to Instagram to share photos of herself alongside her children Curtis Jr. and Sydney, and people couldn’t help but notice the uncanny resemblance between her kids and their grandpa. The post has 2 sets of photos, and the pictures were taken at different times.

While her admirers did notice the doting mom and her cute children, the similarities between the kids and their grandfather, legendary boxer Muhammad Ali, were much highlighted. Few of them thought that the photograph that featured Laila’s son Curtis was a photo of a younger Muhammad Ali. One individual went on to describe – that the children were a reincarnation of their grandfather.

Laila tagged her husband, father, and kids in the photo. Laila also has had a very successful sting in the ring and had a professional career in boxing from 1999-to 2007. She is a recipient of several awards like WBC, IWBF, WIBA, IBA super-middleweight, and IWBF light-heavyweight titles. After she retired, she involved herself in philanthropy just like her father.

In an interview with PARENTS, Laila went on to say that she would prefer her kids play ‘non-contract sports’ such as tennis and also disclosed many other details about her family.