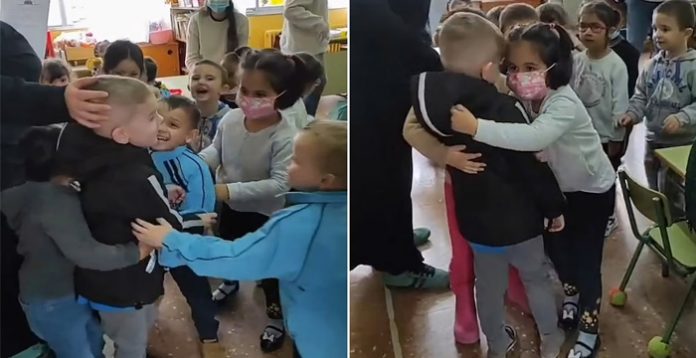 This video of a Ukrainian boy being hugged by his new classmates in Spain is Heartwarming. In the viral video, the teacher is seen introducing the boy to his class but his name has not been revealed.

She tells the students that the new boy is a refugee who escaped Ukraine from the persisting situation in Ukraine. The video was taken at the CEIP Peru school in Madrid, Spain, and the viral video was shared by Ukrainian diplomat Olexander Shcherba after which it went viral.

Later it was found that the little boy had come to Spain along with his mother and a baby sister to live with their relatives in Spain. The boy’s father had to remain in Ukraine owing to the martial laws imposed by the Ukrainian government that did not permit adult men to leave Ukraine.

In the video, all the girls and boys in the class surround the little boy and give him warm hugs. Initially, the boy looks very stunned and unsure how to react but eventually, he turns out to give a very broad smile. Other adults who were parents of the other kids were also seen encouraging their kids as they went on to hug their new classmate. The boy’s uncle said that the little boy is yet to learn Spanish but has gotten along well with his new Classmates and plays with them.

Sources have said that almost 115 children have lost their lives after Russia launched military operations to ‘de-naz-ify’ Ukraine. The international court of justice also ordered Russia to stop the il–gal invas-on from being carried on in Ukraine.

However, in another incident, the children of a school in Italy were also seen gathering at the front gate of their school greeting their new classmates – Dmitri and Victoria, who escaped Ukraine and sought refuge in Italy. The children were seen waving the Ukrainian flags as the siblings walked in. The children were also guided by the student chaperones on their first day.

Earlier another Italian school had organized a birthday party for two Ukrainian kids who had no parents and had fled the country. The kids were welcomed by the local mayor in South Italy. It has been said that over 54,000 Ukrainians have sought refuge in Italy after fleeing their homeland. The interior ministry in Italy had also claimed that they earmarked properties sei-ed from the m-fia and had given it to the refugees.