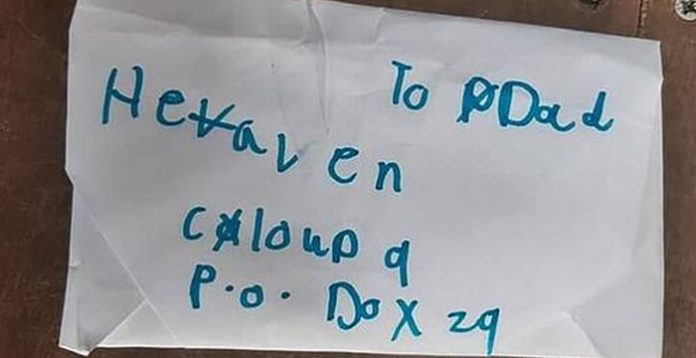 In a heartwarming incident, a mailman decided to surprise a little girl with a gift after he found a letter from her which she had addressed to her father in heaven. Simon, the mailman, found the little girl’s letter while collecting mail from a postbox in Leicester. On checking for the address, he noticed that the letter was addressed to ‘their dad in heaven, Cloud 9.’

Simon was moved and was also worried that the letter might be misplaced without a proper address on it. He decided to visit the little girl in person and surprise her with a special gift. He took his manager’s permission and went online to track down the address of the girl. He posted an appeal on Facebook asking people to help him find the little girl. Simon wrote that he was a postman in the Braunstone area and that he had found a little girl’s letter which was addressed to her father in heaven.

Simon said that he was trying to find the parents of the little girl and to give something to the little girl. He said that he lost his father last year and said that if as an adult, it affected him real hard, he couldn’t comprehend what the little girl was going through. That’s when he found that the letter was written by an eight-year-old girl named Sianna. Mom Sarah Tully said that she was overwhelmed by the response the post had received.

She said that Sianna lost her father when she was just four months old and that she is slowly trying to understand things. Simon said it took him about 15 minutes to contact Sianna’s family and get the letter back to them. Sarah also said that she was grateful for Simon having returned the letter. Sarah said that she told her daughter it was too late to send a letter to her father, but she insisted, and that was how they posted it. Sarah later took to Social media to update them about the gift that Simon had bought Sianna and thanked everyone for their kind gesture.