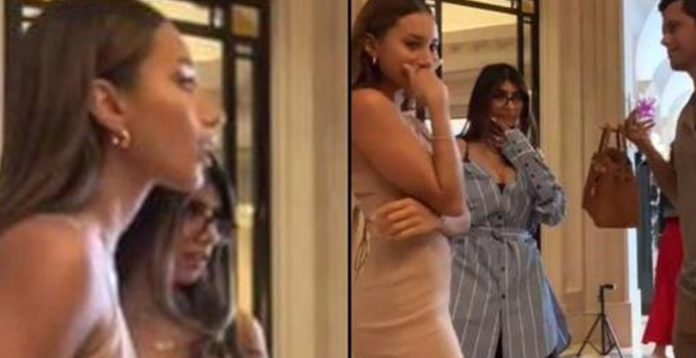 While on their honeymoon, a TikToker’s spouse bought her an expensive present to apologise for identifying former ad-ult film actress Mia Khalifa. Mia Khalifa is a social media figure who has dabbled in a variety of fields, but her past as an film performer continues to be a source of controversy online. That includes Lya Mariella’s companion, who saw Mia while the two were out for dinner in Paris after their wedding.

She stated he became ‘far too enthusiastic’ about it and proceeded to ‘text all of his guy pals’ in a TikTok video. Lya was clearly dissatisfied, and Mia herself reacted to the photo, saying, “Girl, my hubby was on his phone all the time, I propose we toss them all away and go shopping tomorrow.” “I’m now at Hermes across the street,” Lya answered, “feel free to meet me here,” Mia replied, “Good, he owes you a Birkin.” Given that the cheapest Birkin bag costs roughly £5,000, you’d think this back-and-forth was nothing more than joking.

The content creator’s SO, on the other hand, took the apologies sincerely and ended up spending a lot of money on the pricey item. It worked, since Mia and Lya appeared in a video together just hours later, made by the husband himself. “I’m here for the Birkin’s christening… we’re not gonna plunge it in water because that’s not what we do with a Birkin,” Mia quips. “This was the finest meeting ever, and her spouse, about whom we were chatting, is currently filming this.”

“What a moment to be alive,” Lya says as the two embraces. Mia was overjoyed by the interaction, posting a snapshot of one of Lya’s videos on Twitter with the caption: “This Parisian influencer recorded a TikTok feeling guilty since her spouse was happy to see me stroll by at dinner last night, and he gave her a Birkin to make up for it this morning. This is a BIRKIN!!” She also released a TikTok video in which Lya seems enraged with her husband before handing out the bag, with the caption.

“When you’re ready to curse him out for identifying Mia Khalifa but he hits you with the uno reverse: Birkin edition” written over the video. It appears to be all water under the bridge based on the humorous mood of their films, which is to be expected when someone buys you a present as pricey as a house downpayment.