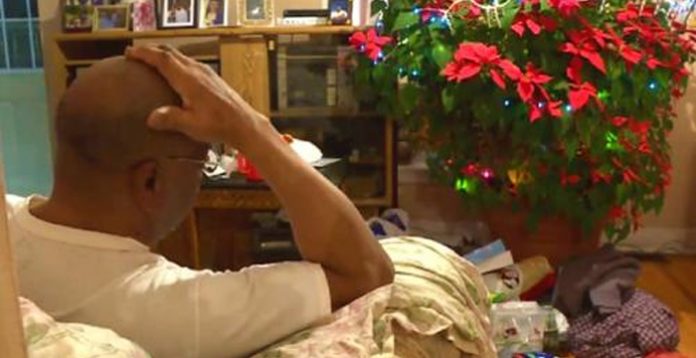 Years ago, on Christmas Eve, Frankie’s wife Maxine won a contest at a call-in radio show. As a reward, she received a small poinsettia, which is a classic plant used to celebrate the holiday season. Three days after receiving the gift Maxine leave this world, leaving her husband and the plant behind.

Frankie was heartbr-oken and initially thought of getting rid of the plant until it started transforming right in front of him. These types of plants usually don’t last that long, nor do they grow big. However, this one kept growing. When CBC News covered the story in 2016, the plant was still alive and had been growing for more than 19 years. Over the years it grew into a massive poinsettia.

Frankie doesn’t require a Christmas tree anymore because the festive red plant is about 5 feet tall and weighs over 100 pounds. He strings the plant with lights. He waters the plant twice a week and even gives it fertilizers, making sure it grows as a tribute to his late wife.

Frankie believes that his wife’s spirit is what keeps the plant growing, and he feels like it is his responsibility to make sure it continues to survive. Although Maxine may not be there in person to celebrate Christmas with her husband anymore, she has left behind a beautiful reminder of her life for him to enjoy.

Plant specialists claim that they have never seen anything like this since it is unusual for poinsettias to last this long.

They are only supposed to survive for a few months if kept indoors. Frankie now says that he is planning to keep the plant for years to come. Some things that happen in life can be hard to explain. Some call it a miracle, and Frankie is now the proud owner of this miracle plant.