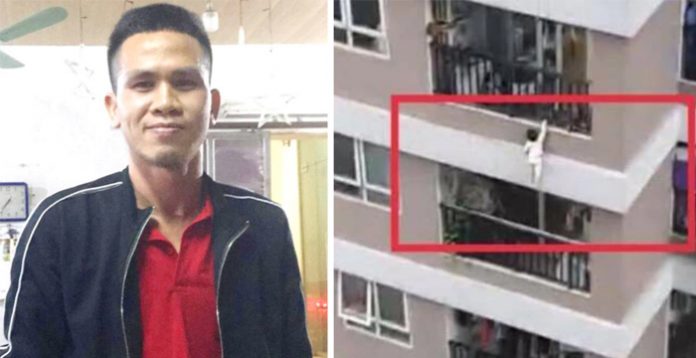 Nguyen Ngoc Manh, a 31-year-old truck driver from Hanoi, Vietnam, was sitting in his truck waiting to deliver a package when he heard a child cry. He didn’t give much attention but, when he casually looked up through the window of his truck, he saw that a child was hanging from the 12th-floor balcony.

Manh quickly sc-ared over a six-foot wall to get on a metallic roof the child would have h-it.

The child lost her grip and fell, and Manh dove in to catch her, making a dent on the roof. The child had bit her tongue, and bl-ood was dripping from her mouth. The child was quickly taken to the National Children’s Hospital, where she is being treated. Manh also suffered a minor sprain in his arm.

Manh’s heroic act was recorded by a nearby security camera and his story went viral. The child’s father thanked him, and the authorities also presented him with a certificate of merit for his courageous act. Manh said that he left the place immediately after saving the child because he was didn’t want any recognition but was just happy to have saved the child because he had a daughter of similar age.

Manh’s actions are an example of how people can perform incredible things without any expectation, and also restore trust in humanity.