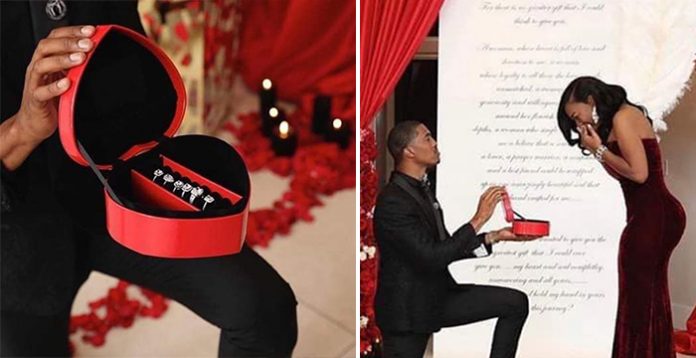 Dennis Brown II was getting set to propose to his girlfriend Atara Dallas when he realized that one ring wouldn’t be enough, so he selected six engagement rings in all shapes and sizes for her to pick from.

Brown announced his decision on Instagram writing, “I succeeded at life with her, therefore she gets 6 rings to select from.”

The male model and former professional athlete, on the other hand, did not stop there with his extravagant proposal. A stylist, photographer, florist, and drapery designer contributed to Brown’s big day. He worked with an event planner and a photographer. For the backdrop of his proposal he even made a banner with passionate remarks.

“A lady whose heart is full of love and dedication to me, a woman whose commitment to all those she loves is unparalleled, a woman whose kindness and desire to help others has no bounds,” he read

According to photos uploaded on Instagram, Dallas was taken aback by the act — as well as the ring choice. Though Dallas was delighted with the presentation (she said yes), the proposal did not go over well with everyone.

On Twitter, several trolls said that the groom-to-be didn’t know his wife well enough, which is why he had so many possibilities. Many, on the other hand, were ecstatic for the pair.