Meagan Good Reveals She Was Inj-ured by Ill-Prepared Hairstylist, Dealt With Hair Ignorance for years. 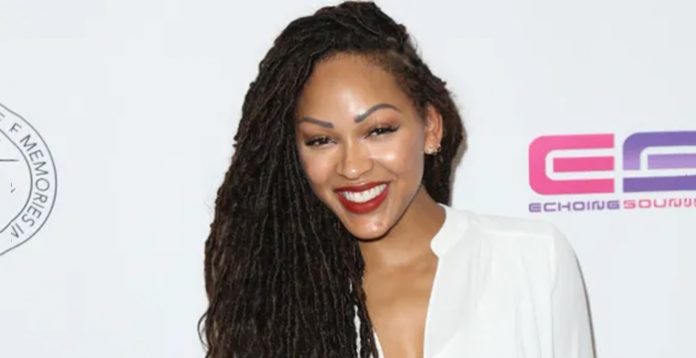 Actress Meagan Good shared her experience with hair mistreatment while speaking at the Hair and Makeup Equity: Changing the industry-standard virtual event held in May. The actress recoiled a frustrating incident that happened on-set by an ill-prepared hairstylist that left her inj-ured.

Meagan who has been highlighting the experience in film recently told fellow panelists and listeners that she was inj-ured on her forehead after a hairstylist “went to press my hair”. As stated by Meagan, “the hairstylist had put a metal comb underneath the comb and suddenly the comb slipped out and the pressing comb burnt my forehead.” The occurrence left her with five or six tooth marks on the face. Meagan said, “It was quite disappointing as the hairstylist say that they knew how to do it and ended up inj-uring my forehead. It was like they used me as an experiment.”

Not only Meagan several other actors opened up about their ordeal in the virtual event. Lamorne Morris, the New Girl actor divulged “he used to go to the barbershop in the morning at 4, 4:30 to get my haircut.” When he reached to set he told, “He would see everyone else in the makeup and hair trailer receiving their haircut.

And when I question why I can’t get a haircut at work, it was because – that is what they told me – they don’t have the budget for my hair.”

Discussing with The Guardian, Camille Friend who is a top stylist and has worked on titles like Captain Marvel, Tenet, and Black Panther said, “Although we are in 2022 hair mistreatment on productions is still a huge industry problem”. She further added, “Hairstylist or makeup artist who lacks knowledge of every hair textures and every color of skin tone. Better education for all makeup artists and all hairstylist must be there.” Friend said that the internal structure of the business has to be changed for creating a better inclusive set. Producers must take the responsibility to look for makeup artists and hairstylists who are well versed.

Friend said, “Hairstylists and makeup artists should not take the job offered to them if they are not qualified to do celebrities hair and makeup”. Owing to that, the actor’s union also needs to make some changes. The Screen Actors Guild is the powerful union that alters the norms for their actors of color. They should set the requirement that the actors can contribute to who is hired for the make and hair departments.