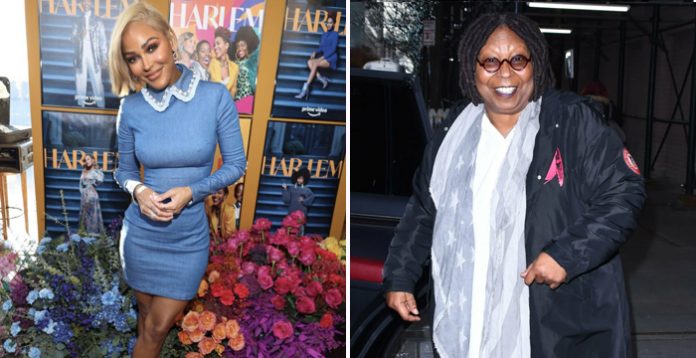 Meagan Good Shares A Hilarious Story About Whoopi Goldberg On The Sets Of ‘Harlem’ Actress Meagan Good is all praises for veteran comedian and her Harlem co-star, Whoopl Goldberg. The first season’ American idol’ winner asked Good about the coolest thing of working with Goldberg, to which she smiled and replied, ‘She’s so nice.’ In a recent interview on ‘The Kelly Clarkson Show,’ Good was seen telling the host that she leaned on the EGOT to remember who to say some of her lines to on the new Amazon series.

In the series, Goldberg plays a Columbia University sociology department head who comes as a supervisor to Good’s character Camille. The episode mainly focuses on the historical and sociological changes in New York City. The name of a small African American landowners borough in Manhattan, New York City, became a struggle for Good, who couldn’t pronounce it right. She recalls that she kept calling it Sen-e-ca instead of Seneca village and that is when Whoopl had taped the pronunciation of the phrase across her chest.

Good never noticed that until Whoopl mouthed her to look down and said she was trying to help her get it right. Good had also mentioned the incident in another interview with Entertainment Weekly. Good says that she was excited about working with Whoopl admitting that when the show was shut down due to the pandemic she was concerned about reuniting with the cast.

Harlem, produced by I AM OTHER production house is a series that revolves around the lives of four black women in their 30s trying to figure out life. While the second season has not been picked up on Amazon streaming services Tracy Oliver, the creator of the series, said to TVLine that her team is already working on scripts for the next season.