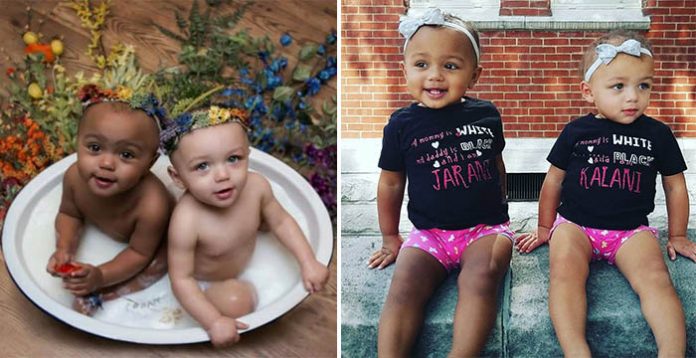 These lovely twins from Quincy, Illinois, have gone viral after proving that twins don’t have to look similar. Mixed-race couples have a one in 500 chance of producing children with varied skin tones according to the BBC.

After Whitney uploaded a photo of the two cute tots on her social media page with the message “We’re chromosome twins,” the internet went crazy. Jarani (on the right) is the darker one with brown eyes, while Kalani (on the left) is the lighter one with blue eyes.

The girls were born in Illinois, United States of America, to an African American father and a Caucasian mother

Their mother, Whitney, shared a photo of the baby twins on her social media page, which went viral

Nobody thinks they’re twins, so we’ll have to wait and see what shenanigans the ladies will perform as they grow up!