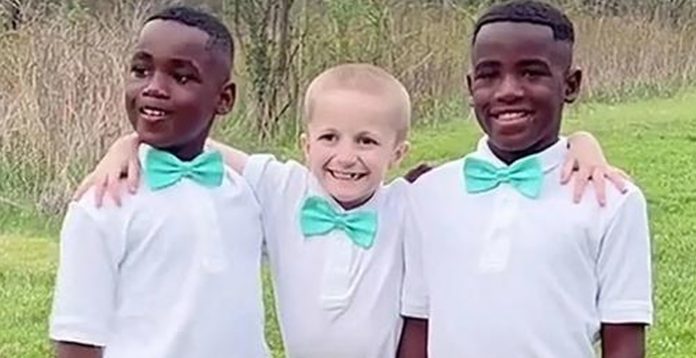 Alicia Dougherty is a mom of 10 based out of the UK. She has a TikTok page called the Dougherty dozen, where she regularly posts about her interesting family. Recently she caught the attention of many people when she posted a video of her biological son along with two adopted twins and called them triplets.

When someone asked her about her triplets, she said that the twin boys were born in the same year her biological son was born and so they have been raised as triplets.

All their lives regardless of their height or skin tone and that if anyone told them otherwise, they could potentially tear them apart. This response from Alicia garnered a lot of appreciation from her viewers, who said that the little boys looked so happy and proud. SUN newspaper recently reported that Alicia used to be made fun of for having ten children, of which six are adopted. All six adopted children suffer from Fetal Spectrum Dis orders.

Alicia said that she doesn’t care about what people have to say because it comes from their unsecured and that happiness comes from being our authentic selves. She even thanked people who checked on her saying she was doing good amidst the online ridicule.

She also took people by surprise when she revealed that the total cost of her weekly grocery run comes up to $1,094 a month, which means about $56,000 a year. Well, that’s quite something.

Alicia keeps posting videos of her family life and keeps her followers updated about what’s happening in her family. She has about 4.4 million followers on TikTok, and her videos have been liked about 168.1 million times.

Alicia and her partner deserve the best for raising their kids the right way and for building such a happy home for the kids to grow up in.