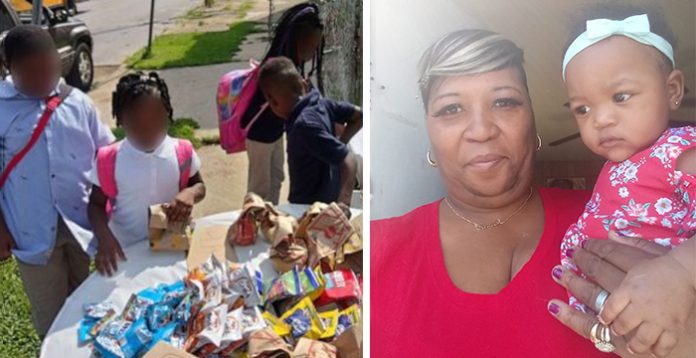 Champale Anderson, a 48-year-old mom of six, has been receiving a lot of appreciation for her kind act. Every day around 2:30 in the afternoon, she sets out food on the table outside her home to feed hungry kids. She has been doing this for about five years now.

In a conversation with Good Morning America, Anderson said, “Sometimes kids get a bag and come to my house around 7 p.m. because that may be the only meal they have during the day.” She started handing out food after noticing the friends of her kids, who were hungry over at their houses.

Anderson says that her area is a beautiful one where people take care of each other. However, the surrounding area is full of poverty. Her house is situated right by a bus stop for the local schools.

Anderson works at a healthcare company, and once she finishes her shift by 12:30 p.m, she comes back home and ensures that she cooks before the first group of kids arrive. Her food table is called Champ Tears Drop. Her food bags usually have a sandwich and another treat – some days it’s cookies or chips, and other days it’s fruit. She also includes neat sandwiches whenever she can afford meat.

Anderson also serves breakfast to kids, who are running late for the school bus in the morning, and sometimes she even drives the kids the few blocks to school. She says that growing up, she had a rough childhood, and she wants to ensure that no other kid goes through the same.

Anderson says that some people help her in whatever way they could. An online fundraising page was set up for Anderson to help her buy food supplies. She has already raised $25,000, which is way more than her original goal of $1,500.

Anderson says that she wants to raise enough money to start a free recreational centre for kids in her neighbourhood.