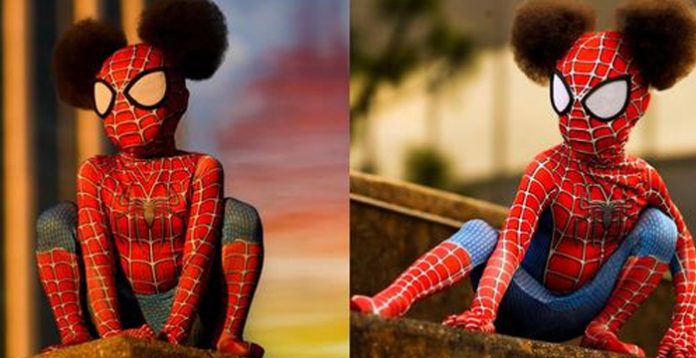 A three-year-old girl from Mobile Alabama has caught the attention of several people on social media as she wore a Spiderman costume with her adorable hair puffs. The little girl, Demi Rose Jackson’s love for Spiderman is winning the hearts of thousands on social media. Her mother Diamond Jackson and eldest sister shared the deeper meaning behind the costume.

“We came across a spider man lunch box or book bag in Target one night and she fell in love with it,” Diamond rose said. “Since then she has been crazy about spider man things. She even loved spiders.” In complete Peter Parker fashion, Demi rose stayed within the character and her family did all the talking. They say that the little one insisted on wearing the actual Spiderman costume, not just some random superheroes dress. And with that, she becomes the spider girl.

Demi’s eldest sister Denver helped her hold the string while she pose her web. Denver said, “when I saw the costume, I was so excited. I was like oh my God it’s so adorable.” Denver also shared about her little sister’s activities at home she said, “At home, she is active and often troubles us. She is very bad but she is sweet.” The picture was shared nearly 75 thousand times on Facebook and now it is making its way to Instagram. Soon people started stating the picture as “Black Girl Magic” and even actors Viola Davis and Michael B.

Jordan shared the picture. Denver and Diamond say that the highlight of the picture was Demi’s natural hair.

“I believe afros were always kind of big but before it wasn’t,” Denver said, “But after the spider-man Photoshoot went viral it inspired a lot of people, it made a huge difference.” Diamond said, “I want them to love and embrace their natural hair. I believe it is important to love every part of themselves. When I say them I mean all my three daughters. I even cut my own hair to go natural and show that if I can love myself like this so can you.”

Diamond hopes that this moment will continue to bring happiness and inspire acceptance across the world. She said, “My heart is full. With everything going around the world I felt like it’s perfect to have a little superhero that we all can believe in,”